The FIRST competition has come to an end, to conclude our blog series we want to congratulate the teams on their successes. We are incredibly proud of all the teams, especially the teams that we were able to sponsor this past year. We cannot wait to see the innovation and creativity that these teams come up with next year.

One team that deserves the spotlight on them is Team 4909 The Billerica Bionics. This team just returned from the Championship events in Detroit, Michigan after competing in the Tesla Division as a two seed. Just to make it to this event was an incredible accomplishment for the team. Unfortunately, the team lost in the playoffs early in the competition, but after talking to a 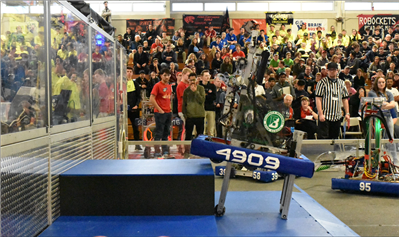 few team members something became apparent; It was more than robots to these students. The team had become a family and the World championship event was able to provide them a sense of accomplishment after a season full of hard work. As a former student of the high school in Billerica, Massachusetts; I couldn’t be happier for the team and look forward to how they move forward towards next season.

The Billerica Bionics first season was in 2014 and has been mentored by the school’s Physics and Engineering teacher Matthew Flood since day one. The mentoring provided from Matthew as well as others has meant so much to the team. Avani, a member of the team went on to say “We honestly would not be able to do any of this without the help of our mentors. They always keep us on track and focused.” Another student Roshan referred to the mentors as “a strong guiding force throughout the high school years.” Further explaining that the team’s mentors have given the team so much insight about their future careers.

The goal for the team this year was clear, after last year at the World Championship events they were eager to make it back and 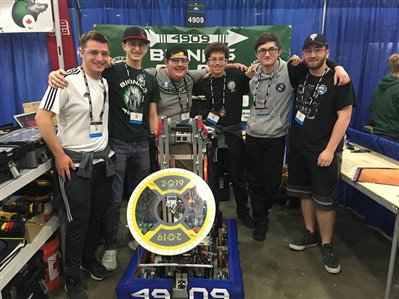 "everyone stepped up to the plate" said team member Tim. When they were at the Championship events it was a surreal moment for team. Matthew, a freshman who is new to the team, said that just to see their team number 4909 on the scoreboard in Detroit was one of his favorite memories thus far. He said that due to his FIRST experience he has made life long friends and has made connections that he would have never got the chance to otherwise.

Although they made it to the Championship events the past two years this team will not become complacent, there is still a greater goal out there for the team and according to Damian, their team is still on the hunt for their first blue championship banner. This year they built the best robot the team has ever built, as well as shattered the expectations for the season. After seeing improvements year in and year out, this team is determined to bring a banner to Billerica.

As this season wraps up, we want to thank all the students who have taken part in the FIRST robotics competitions and we hope that the number of participating teams continues to grow. Exposing students to Engineering and Robotics early on is important because it gives them an opportunity to explore an outlet that they may not have the chance to experience until later on in life.