I have a Masters degree in engineering but have spent most of my professional life in marketing; over 23 years here at Analog Devices. Though ADI is a global leader in the manufacture of semiconductor solutions for signal processing, I am inexorably drawn to earlier tech - specifically vacuum tubes. - thanks to my hobby of restoring antique radios. I have found that stories of advancements and failures in old tech can provide lessons for both the engineer and marketer of today’s high-tech products. Today I look at how a bad (perhaps undeserved) reputation was born, spread, and survived for eighty years…

It was 1940, and the folks at the Zenith Radio Corporation of Chicago Illinois had every reason to be proud of their newest consumer radio. The floor model 8S463 was a real Art Deco beauty, crafted in the finest wood and finished with a high gloss lacquer which seemed to make the radio glow even when turned off. 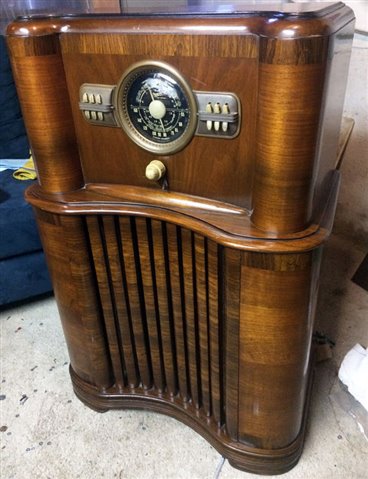 For their $70 (about $1300 today) consumers could do more than just listen to their favorite AM station. The Zenith 8S463 also had a shortwave band so they could hear the latest news directly from the countries involved in the European war. It also included the police band, at the time located just above AM. A phono jack on the back of the chassis allowed for an audio feed from a phonograph or the latest technological marvel, then in limited use: television.

$70 also brought a potential disaster into thousands of American homes.

First, a quick lesson on tube radio power supplies. Tube radios need both AC (alternating current) and DC (direct current) to operate. Some of the AC is used to heat filaments in the tubes. Cathodes, heated by the filaments, give off electrons when hot, providing a source of negatively charged electrons. Positive DC voltage – often 400 volts or higher – is needed for the plates of the tubes to provide a path for the electrons from the cathodes. Both the DC and AC must first pass through the power transformer, circled in red below. 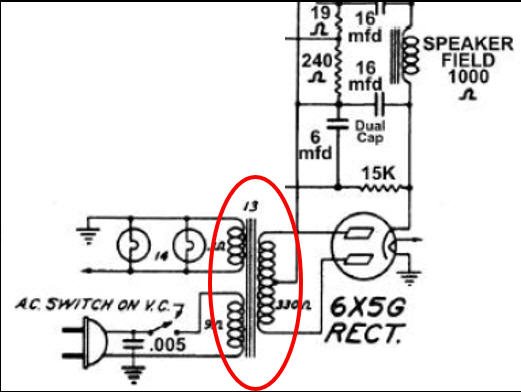 We are just warming up – literally. As we see in the “WARTIME” service bulletin below, Zenith had been hearing from the field that transformers in the 8S463 (as well as a few other models) had a troubling propensity to heat up. Before you could say “Little Orphan Annie” they would smoke, and then fail. 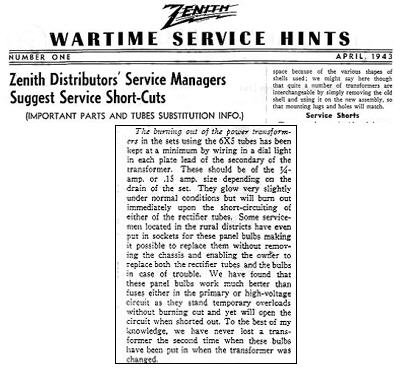 If customers were lucky, the wires inside the transformer would burn out open. It wasn’t cheap, but then all they’d have to do is call a serviceman to install a new transformer (a more robust one, suggested Zenith.) But, if they were not so lucky, wires inside would fuse together and short the transformer. This either blew a house fuse or, if the owner was really unlucky, short B+ (high voltage going to the plates) to ground. Kiss the tubes and other components goodbye.

In the service bulletin Zenith subtly intimates a problem with the 6X5 rectifier tube. "The burning out of the power transformers in the sets using the 6X5 tubes has been kept at a minimum by wiring in a dial light in each plate lead...” Suggesting the use of dial lights as fuses was not a bad idea. An excess of current flowing from the transformer would overheat and open the bulb’s filament. This open would stop current from flowing, preventing the transformer from shorting. Problem solved, right? Well, not if you read on to the part where Zenith says “…we have never lost a transformer the second time... when the transformer was changed."

So, was there a problem with the transformer? Not really. It was a perfectly fine transformer but the folks at Zenith had put it into in a circuit requiring way more current than it was designed to handle. But, as we already saw, Zenith was then quick to throw a little shade on the tube by recommending the installation of dial bulbs “…in the sets using the 6X5 tubes.” So now we’re back to the tube. Was there a problem with the 6X5? The answer is… not so definitive.

Some say the 6X5 was a disaster waiting to happen, in part because of the physical construction of the tube in which the filament and the cathode which it is heating are spaced too close together. If (and, some say, when) a high voltage breakdown of the aluminum oxide occurs the 6X5 would fail AS A SHORT, not as an open - the filament/heater and the cathode simply fuse together. Within time the B+ also shorts to ground and that’s when disaster strikes inside the radio. This might explain why Zenith recommended both a transformer replacement and dial light bulbs in series to protect the circuit - not from the transformer but the 6X5. 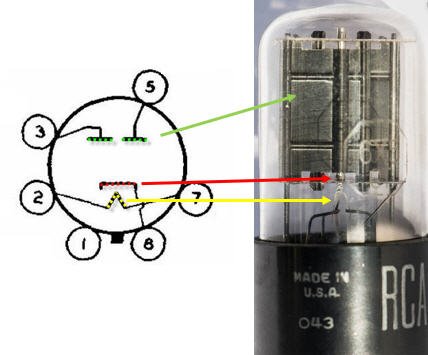 But is the 6X5 really deserving of, as one hobbyist wrote “…possibly the most universally-reviled type in all of tubedom?” Lots of other rectifier tubes have similar configurations in which the cathode is indirectly heated by a filament but none have gained such enmity. Subsequent versions of the 6X5 (released with different arrangements of the three elements) seemed to justify the concern. Known as a “Ruggedized” tube, it features plates in a “Figure 8” pattern as well as a wider spacing between the filament and cathode. Did this solve the problem? Depends who you ask. A couple of years ago, when I finally got around to restoring the piece, I found the debate over the 6X5 tube still raging today. Here are just a few of the opposing viewpoints posted on the Antique Radios website:

“The late production 6X5GT’s had some design improvements, but I still don’t trust them. There is no way I would put a 6X5G in ANYTHING.”

The argument for/against either transformer or tube is further complicated by an increase in voltage fed into the typical American home. In the 140 years since the distribution of AC began (see my piece on the great battle between Edison, Westinghouse, and Tesla) line voltage has steadily increased:

Higher line voltage, an under-rated transformer, and a flawed rectifier tube add up to a bigger-than-usual challenge for today’s Zenith radio restorers like me. What combination of modifications would provide for safe operation of the set? Replace the hated 6X5 tube with diodes? Install a beefier transformer? What I decided to do was keep the transformer but make changes to mitigate (but not repair) the aforementioned concerns. 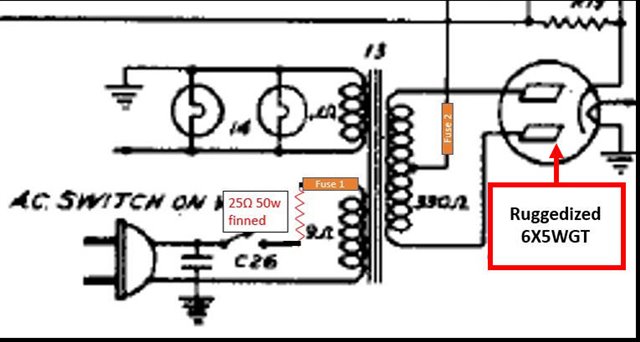 In the Boston area we have an AM radio station (740 WJIB) which, on Sunday afternoons, plays “crooners and Big Band” music appropriate for this pre-war Zenith. I have confidence that for the few hours a week I play my beautiful Zenith it is safe to do so. I hope I sound this good when I’m 80 years old.