It surprises some people to learn that, though cell phones offer inexpensive, instantaneous communication worldwide, there are still millions of active ham radio operators around the world. We like to say that there is something for everyone in our hobby. Some of my fellow hams are actively engaged in supporting disaster relief efforts (they were an especially critical part of the still-ongoing recovery in Puerto Rico). We have astronaut hams orbiting in the International Space Station who have set up a station to talk to us earth-bound hobbyists. Other hams design and build high-gain antennas for bouncing signals off the moon. We do these things-and more-while using methods that range from state-of-the-art digital modes (that run on our computers) to good old-fashioned Morse code.

The facet of the hobby I enjoy is operating HF, on eight different sets of frequencies between 1.8 MHz to 28 MHz, called bands, that have been allocated to ham radio. Lucky placement of trees on opposite ends of the long side of my property provided me with a place to hang a 100’ center fed dipole. Dipoles are great. They are inexpensive - they’re just wires, really, with a feed line and some rope to hold up both ends in available trees - plus they are easy to design, install, trim, and fix - and for a bonus they even have a little gain (although it’s directionally fixed because they don’t rotate.)

Here’s an aerial of my property, showing the location of the dipole and, in the inset, a picture of what is called “twin lead” (the feed line from the transmitter to the antenna) and the antenna tuner, intended to “fool” the transmitter into seeing a 50Ω load (even though the actual antenna is not resonant on the frequency.) 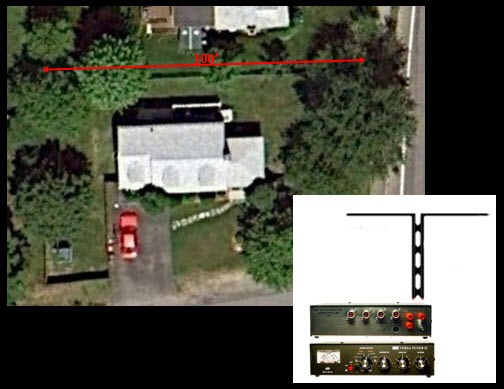 Using this dipole on HF frequencies I made contacts with all 50 states and over 200 countries as far away as southwest Australia – practically on the other side of the planet. However, when I operated on the lowest ham band, 160 meters (1.8 to 2.0 MHz,) performance was sub-par, since the dipole was only 25 feet above the ground, and that’s just a fraction of a wavelength on 160 meters.  That meant most of my signal was going up, not out. My longest-distance contact on the band was only about 1100 miles away.

During a lunch-time conversation with Analog Fellow Woody Beckford (WW1WW) I explained the problem. He suggested that I convert my 100-foot dipole into a vertical by twisting the leads together and feeding them into one side of a balun. A vertical would provide a lower “take-off” angle for my signal, increasing the distance that my signal would be heard. This is dramatically shown by EZNEC, an antenna analyzer program popular with hams: on the left is the model for the pattern of a dipole at 25’ and on the right side was the model for a 25’ vertical at the same frequency.  Note the lobes in the right-side model showing the lower take-off angle of RF:

Because the dipole – and therefore the vertical - would be limited to 25’ height (a small fraction of a 160 meter wavelength,) we knew getting it to tune up on frequencies as low as 2.0 MHz was problematic. Using EZNEC, Woody calculated parameters for a base-loaded coil that would not only electrically extend the antenna but also eliminate the need for a balun. Here’s the coil I designed from Woody’s specs, with 38 turns of #10 wire around a 2" piece of PVC.  The wire out of the top connects to the twisted pair leads of the twin-lead, an SO-239 provides easy connection to coax from the shack, and the lugs allow for easy addition and removal of the radials: 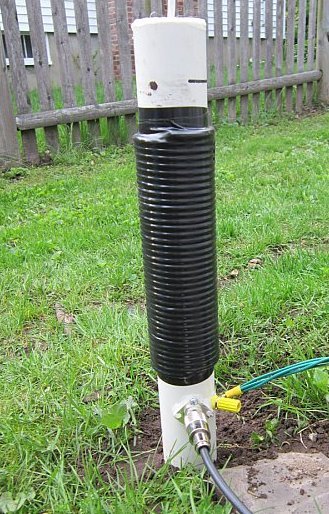 Ah, yes, radials. You see, at this point, the antenna was quite literally only half complete. That’s because verticals need something that dipoles don’t. Vertical antennas can be said to be only "half there," the other half being a "reflection" in the ground, which means they rely on the return currents through the ground, via wires radiating from the bottom of the vertical (hence the word “radials"). So basically that means if the ground system sucks the antenna will, too. It may load up nicely but as Doug Grant - another former ADI employee and ham operator (K1DG) reminded me - so does a dummy load.

To quantify the effectiveness of the ground radial system we can use radiation resistance (R) which, in one term, expresses loss from the entire system: the antenna, the feed lines, and the radial system. We need R – and a special meter (I used an MFJ-259 antenna analyzer) to help answer a number of questions: How many radials do I need to install? How long should they be? Should they be elevated or buried? What effect will my house, my neighbors’ houses, soil conductivity (which can change from season to season) and buried gas, water, sewer, telephone, and cable lines have on R or the vertical’s broadcasting pattern? There were simply too many variables to calculate. Only testing (by laying out radials) would reveal the answers. And this is where the fun began.

With a 1000’ spool of insulated wire in hand, I began a few months of laying out the radials and measuring SWR, R, and X (which I haven’t mentioned yet, is reactance, which is the opposition to alternating current due to the combination of capacitance and inductance inherent in any antenna system), all of which we also want as low as possible. For the purpose of this blog we will focus on R, since X tends to follow R up or down and although a naturally low SWR would be preferable, I could always use the tuner to present a 50Ω load to the transmitter. The first test was with four radials at ground level, laid out at the edge of my property and next to the house, as shown in this annotated aerial: 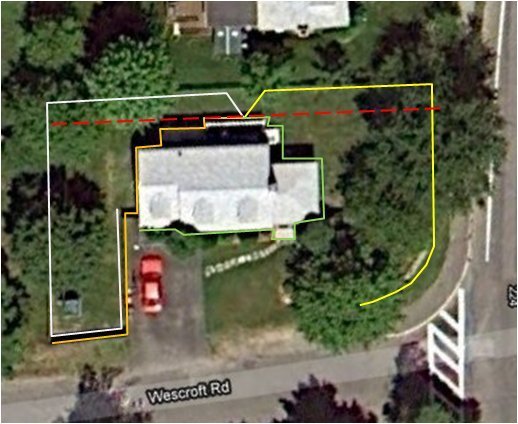 The results were encouraging although at its lowest R, was above my soft target of 50Ω and gradually increased with frequency until, at the top of the band, it was over 60Ω. More radials were clearly going to be needed, but where could I put them? The answer lay in a series of articles authored by Rudy, N6LF, titled QEX articles on verticals and radials in which he details how elevated radials can be as effective - and sometimes more effective - than ground-based radials.  After reading this I ran a pair of radials approximately 3 1/2" off the ground, along the upper support of a wooden fence that ran around my backyard. The results were brilliant, with a drop of at least 10Ω across the 160 meter band.

With nothing but time and plenty of wire left from the 1000’ spool, I experimented with the addition of several radials in various layouts, including one test in which I figured “hey, if one set of elevated radials reduces R by 10Ω, why not add a second set along the middle of the fence?” Imagine my surprise when I measured R actually going up across the entire band! (Who wants to tackle the math to explain that?) Ultimately, after trying a few more layouts and lengths, I found that the addition of two more 70’ radials laid out on opposite sides of the vertical performed best, reducing R across the entire 160 meter band by about another 5Ω. Here’s a plot of performance of the original four radials (in red), with elevated radials on top of the fence (in blue), and with the final two, 70’ ground-level radials in place (in green).

After sharing these results with Woody and Doug (and asking "what should I try next?") I was given my favorite piece of advice ever: Stop, already, and just get on the air! By then it was October and, with winter coming (a time when 160 meters has optimum operating conditions) I was happy to stop digging up my backyard. Over that winter - and since - the antenna has performed way above my humble expectations, with contacts made in all the lower 48 states and over 35 countries, some with hams over 4,000 miles away in Eastern Europe, Russia, and South America - a HUGE improvement over the dipole. Well worth the effort and strange looks from the neighbors as I was digging and burying wires in my yard. 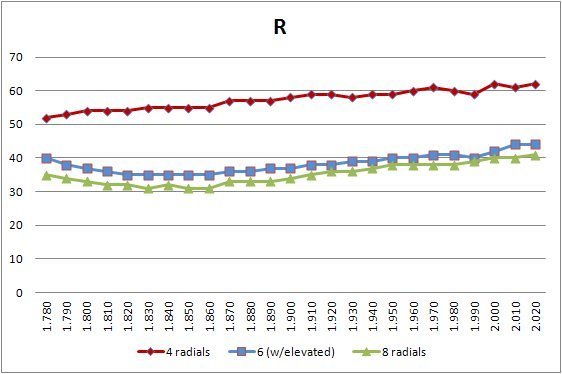 A lot has happened since I wrote this piece almost a year ago.  My first antenna was lost when one of the trees I was using for an end had to be removed, due to a disease. Then the antenna mast I installed as a replacement fell down in a snow storm.  Only the kindness of my next-door neighbors (who let me use one of their trees for the antenna) kept me on the air. There was a benefit to the losses of the tree and mast.  My neighbor's tree is much higher and so my vertical went from 22' to over 40' tall. This resulted in an immediate boost in performance. On a recent winter morning I completed an exchange with a station in New Zealand. That's over 9,500 miles on 160 meters! A few days later made a contact with a station on the Antarctic, a trip of around 8,500 miles. For more information on these and other contacts, as well as data, and pictures of this vertical project, please visit my ham station website.