FAQ: After downloading self-boot code to my target EEPROM, my USBi isn't recognized anymore by my computer. What's wrong and how do I fix it?

The USBi can be used to program SigmaDSPs, some audio codecs, and EEPROMs that are used in self-boot systems. When an EEPROM is connected to the USBi in a SigmaStudio project, the target address is defaulted to 0xA0. 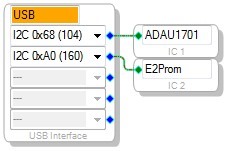 Currently, all SigmaDSPs self-boot from address 0xA0 only. However, in case future SigmaDSPs would have the capability to boot from different EEPROM addresses, a drop-down menu was added in SigmaStudio that permits other addresses to be selected. 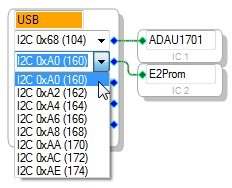 However, when this feature was initially implemented, a potential problem was overlooked. The USBi has its own self-boot EEPROM at address 0xA2, which it uses to indicate its Vendor ID and Product ID to the PC, as well as boot its internal program. If you attempt to write to address 0xA2, you will overwrite the USBi's onboard EEPROM and the USBi will cease to function!!! 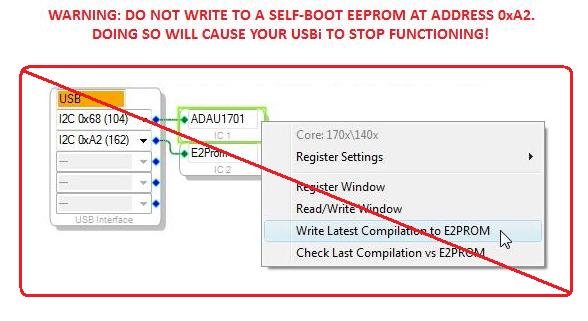 The option to select address 0xA2 will be removed in the next release of SigmaStudio.

There is no simple way to re-program the USBi's EEPROM after it has been corrupted. Please return it to ADI (you should be able to get an RMA through your salesperson or distributor).

This FAQ was generated from the following discussion: How to avoid corrupting the USBi's EEPROM