Preserving "Ear-candy" in a mono mix

Ear-candy is what my friend calls the upper frequency range and its resulting nuances in music.  Often, when a stereo source is mixed to mono for use in a PA system, some ear-candy is lost from phase cancellation.  The resulting sound can be dull and lifeless.  One could simply boost treble to compensate -- but can we do better?  We could instead measure the treble content that's thrown away in the mono mix and then dynamically boost a corresponding amount.

Here, a crossover splits the mono mix into low and high frequency bands.  Separately, the HF difference sound (lost in the mono mix) is measured and a ratio taken with the mono HF.  This adjusts the treble boost.

A divide block is needed to figure the ratio, but here the Sigma 100 (ADAU1701, etc.) divide block isn't up to the task -- it cannot handle divisors smaller than 0.0625 (see https://ez.analog.com/message/141869#141869).  Instead, feedback around a multiplier provides both the divide function and a low-pass filter.  Any lost ear-candy adds to the base gain of 1.0, causing a boost in the HF channel.

It's fascinating to view the Real-Time Display showing the boost -- and thus, just how much HF we have thrown away in the mono mix.  With a mono podcast input, the display flat-lines at 1.0 -- nothing lost, no boost.  Below are examples of stereo music inputs -- the left trace with Chuck Mangione's Feels So Good, the right trace with a dramatic movie soundtrack.  In both cases, the aural effect is both subtle and welcome. 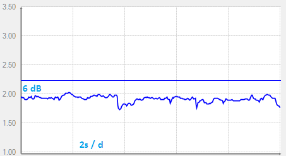 KeepCandyX-saveMIPS.dspproj.zip
Related
Recommended
EngineerZone Uses cookies to ensure you get the best experience in our community. For more information on cookies, please read our Privacy & Security Statement.