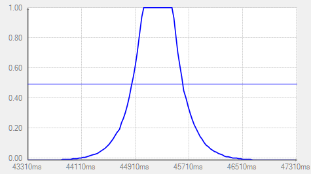 The ADAU1452's toolbox contains a External Slew Volume block with more slew choices compared to those of previous SigmaDSPs.  Its  RC and Linear slew rates are described at https://ez.analog.com/message/165526#165526

The Exponential slew has some unique characteristics, explored below.

A given slew number sets up the corresponding dB/s exponential rise shown in the table below.  This rise abruptly stops when the block's gain reaches the new input set-point.  The chart below shows slew times for a 1% to 10% rise, as well as a 10% to 90% rise, where 100% is unity gain.  For a given slew number, the times depend only upon your gain interval -- in other words, you'll get the same 10% -- 90% slew time whether your input jumps from 0.1 to 0.9, or if your input jumps from 0 to 0.9 and you begin timing as the rising gain crosses 0.1. 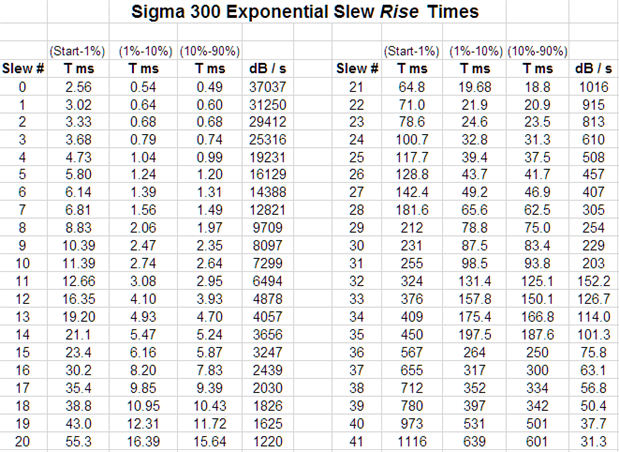 This leaves the Start -- 1% measurements as an interesting special case.  Here  the input and gain both begin at zero.  Timing begins when the input jumps to 1, and ends when the block's gain reaches 1%.  An exponential rise from zero remains at zero, so in theory this slew should take forever.  In practice, the block slews from 0 to 0.01 in a finite (though quite long) time. 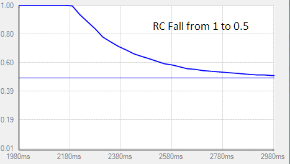 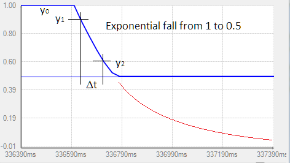 The RC slew acts exactly as a resistor-capacitor circuit.  The exponential fall, however, always follows its characteristic fall to zero, as suggested by the thin red curve shown.  It abruptly stops when falling gain reaches the input set-point.  Thus, when making a small input drop the exponential curve appears almost linear, and the resulting gain fall measures faster than with the RC choice.  To predict the fall time Dt for a fall from y1 to y2 from an original level y0, start with the time constant T from the RC chart at https://ez.analog.com/message/165526#165526.  Then calculate the fall time:  tfall  =  T x [ ln(y1/y0) - ln(y2/y0) ]