I am currently developing using EVAL-ADAU1787Z evaluation board.

I was following the User Guide to make a simple route for testing.

The problem is that when I press Link Compile Download, it gives me the communication failure prompt as attached figure.

- In Hardware Configuration of SigmaStudio, USBi module turns green when plugged in.

- Yellow and Red lights are on at USBi PCB.

- Checked all jumpers and switches as EVAL-ADAU1787Z default settings on Figure 2 in User Guide.

I have tried to search around for solution, all the related posts can not solve my issue.

I can see that someone may have a similar issue with a different EVAL board using USB 3.0 port, but I am keeping it on USB2.0.

- tried to use different USB ports on a same machine, same issue

- tried to setup on another win7 machine, same issue 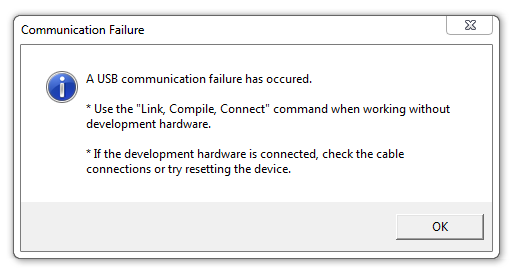