How to configure potentiometers

My ADAU1701 DSP board have 3 potentiometers connected to MP3, MP8 and MP9 into the AUX-ADC input.-

I have uploaded a capture from the developer's example.

This is for master volume control.

And this is for filtering I suppose: 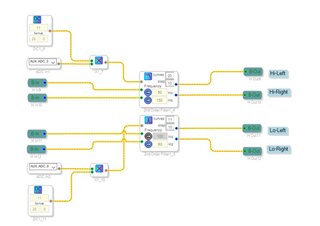 I would like to know the importance of DC input entry and it's format. Is it always the same value? it depends on the pot utilized?

Also, as I am a complete illiterate in this matter I would like to understand the cells needed here. I assume the AnalogDigitalConverter (pot) modifies a DC current (dc block) and it's product (multiply block) affects a 2nd order filter with Lookup.

Regarding the master volume, is there any easier way to implement it? I really dont understand all the cells and blocks.

Lokking forward to your help