Yes, there are poor engineers.  Where I work audio is a sideline, so we do not yet have a dedicated distortion analyzer.  I've been toying  with buying a used one on eBay, but it's interesting to see what can be done with just a ADAU1701 evaluation board and SigmaStudio.

As shown, this signal flow drives the device under test with a 1000 Hz tone.  In turn that device outputs the tone along with harmonics and noise.  The ADC samples this and the DSP notches out the tone, leaving the rest.  Then it's compared with the tone level to calculate:

Accurately reading the signal and the noise requires true RMS measurements.  SigmaStudio has some RMS-responding blocks, but they're described as "approximate".  Thus my distortion analyzer uses built-from-scratch RMS to DC converters.  These converters are quite noteworthy in themselves -- they employ an implicit method I shamelessly lifted from the venerable AD636 analog RMS-DC converter IC.  That chip is still around after 30+ years because it works so well!  A snippet from its data sheet explains implicit RMS conversion: 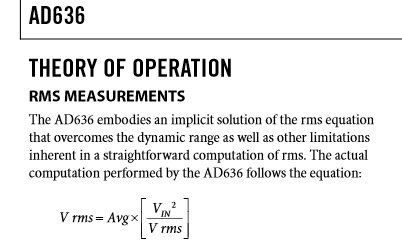 This analyzer is of course limited by the -1701's own THD.  A direct connection from DAC out to ADC in reads 0.007%, so under ideal conditions you can measure down to about 0.01%.  Ideal conditions mean keeping the -1701's input and output levels near, but not right at, their maximums.  Thus you may need to improvise pads to operate your tested device at its desired levels.  Also I recommend running SigmaStudio on a laptop under battery power.  Finally, note that the sine wave output (from the DAC) is common grounded to the analyzer input (the ADC).  Thus, bridged power amplifiers could only be tested one side at a time.  It may be possible to use both input ADCs in a differential mode, but this was not tried.  Of course you'll definitely need some serious external attenuation to route that output into the -1701.   If you use a separate pure 1KHz source, you'll need to tune it carefully (as with the old analyzers I've seen on eBay).

A PA mixer (not studio quality) tested with this analyzer measured 0.04% distortion normally, and 0.05% when driven into compression.  It always sounded OK to me, but now I know exactly how it performs!

Message was edited to include note on common-ground.