This is a just-for-fun project, for which no claims are made that it's optimal.  I just drew it up in half an hour a few months ago, and then tweaked the thing until it worked.

The incoming composite signal is filtered into its three components:  the mono audio, the suppressed-carrier difference signal, and the 19 KHz pilot tone.  The latter needs doubling in frequency to 38 KHz in order to restore the suppressed carrier and demodulate the L-R signal.   Here it's done by phase-locking a local VCO to the pilot, producing a stable, constant-amplitude replica.  In many phase-locked loop (PLL) applications like this, a divide-by-two counter within the loop makes the VCO run at double frequency.  Here a simple squarer and DC block doubles the frequency after the PLL instead. 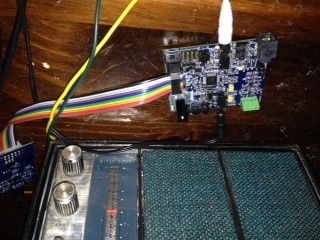 I pulled the composite signal from the FM detector in this transistor radio to feed the eval board's A-D input, then listened in stereo at the board's headphone jack.  It was that simple!  Many years ago I experimented with a LM1800 MPX demodulator IC, which works pretty much the same way as this DSP implementation.  Both do a good job, which I attribute to the PLL as it provides a stable carrier with which to demodulate the L-R info.  There's nothing like synchronous demodulation, which also should be in every AM radio more sophisticated than a crystal set (but unfortunately finds itself only in high-end shortwave radios).