I´ve already done a project with the ADAU1452 and wanted to realize a small 4In4 DSP amplifer. Therefore I´ve moved to the ADAU1701 and a digital TDM input amp from TI TAS6424. I´m using the internal ADCs of the ADAU1701 and one 2-Ch exernal ADC via I²S, process them e.g. for a 3.1 (L/C/R/SUB) configuration and send the digital TDM stream to the TI chip. The ADAU1701 is Master for both input and output according to another thread here:

The settings of the hardware configuration window are: 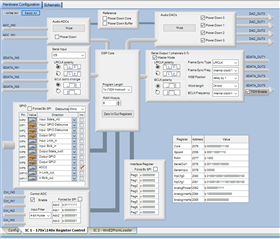 The PCB is 2-layer 70um with SMD parts in which the bottom layer is alomst only GND. The feedback trace of LRCLK and BCLK output to the input is done directly whereas the connection to the external ADC and AMP contains 33R resistors. The traces are kept as short as possible. On the AMP side MCLK is hard-wired to BCLK (This is a possible operation mode for TDM when no MCLK signal is available according to the TI chip manual)

The first tests have been very promising but I´ve noticed two strange issues with channels that use LP filters in their signal flow: 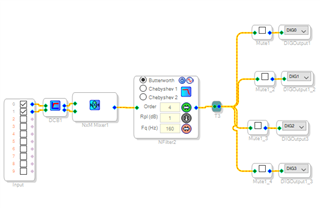 I´ve bought the EVAL board of the TI amplifier chip to verify that the distortion does not come from the amp. With the EVAL board I don´t have these issues. Then I´ve tried to hook the ADAU1452 EVAL board TDM pins to the TI EVAL board and the transient noise was present again. I found out that when I use a buffer IC like 74HC125 between the DSP and the AMP the noise is gone. I´ve tried to verify with the oszi but I don´t understand why the buffered version is working as it should whereas the direct connection over a 33R resistor (I´ve also tried higher values and even ferrite beans) does "produce" the sound. I´ve already done another project that uses only the ADAU1701 and the TI TAS6424 without the I2S feedback traces and tesetd the same configuration with the same noisy result. The buffered CLK signals seem to have smaller fall/rise times but the raw CLKs look already good for me? 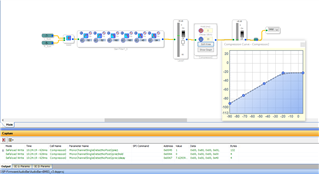 Any feedback is highly appreciated! Thanks in advance :-)