In April 2018, I began running LT8362 SEPIC power supply simulations in LTSpice (for Mac OS X), with a 5V output.  There's a long and detailed discussion about that here. That project was shelved until recently, and I never obtained the approval to buy parts to build an actual working circuit.  The design requirements changed, now calling for a 3.3V output instead of 5.0V. I adjusted the LTSpice simulation file accordingly, which you can download here:

(Please note that I have still not yet built a working circuit. I am merely simulating in LTSpice for now.)

This power supply will be for automotive use, so I am using the ISO 16750-2 12V Starting Profile, although I've made some adjustments to make it simulate faster as Vin falls (such as starting the voltage at about 7V instead of 12V).

More specifically, when all the output capacitors have Series Inductance (like any real capacitor), I am seeing this unexpected output... 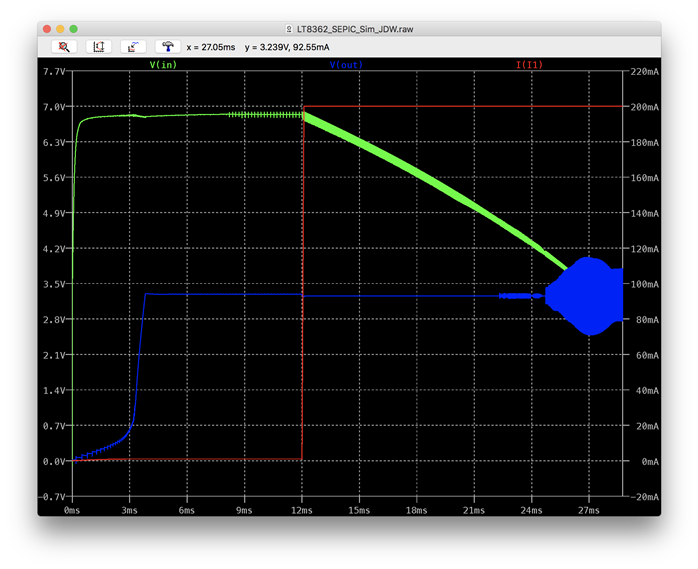 That massive blob of blue is comprised of shockingly large 1.5Vp-p ESL spikes on the 3.3V output, despite my use of largely the same ferrite bead EMI filter shown on pages 27 & 28 of the LT8362 datasheet. Load current in my circuit rises to 200mA, which should be well within the capability of the LT8362 and the current design. (It is a SEPIC design, which means the output should remain close to 3.3V even when the input voltage drops a bit below 3.3V.  In this simulation, I allow Vin to drop as low as 2.9V to simulate worst case 12V vehicle cold cranking.)  I also simulated it with a 300mA load, and the ESL spikes are even more massive than the above blue blob. 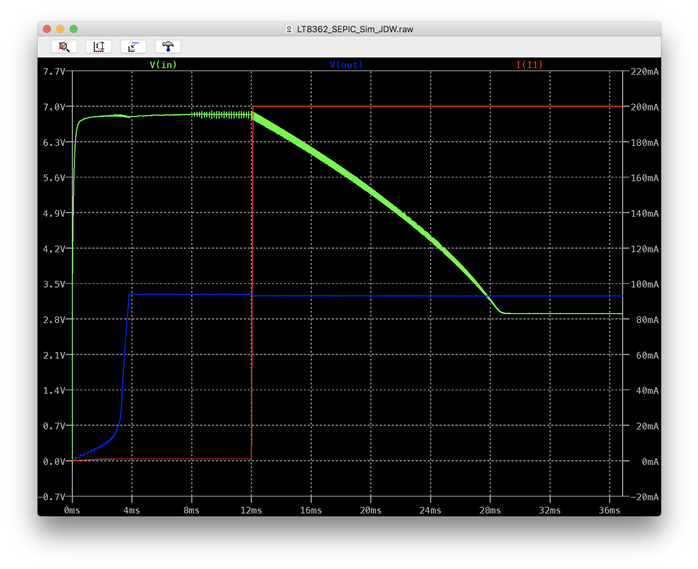 I know the ESL spikes have nothing to do with Anti-resonance pertaining to the output capacitors because I simulated that in a separate file and found the curve to be perfectly fine... 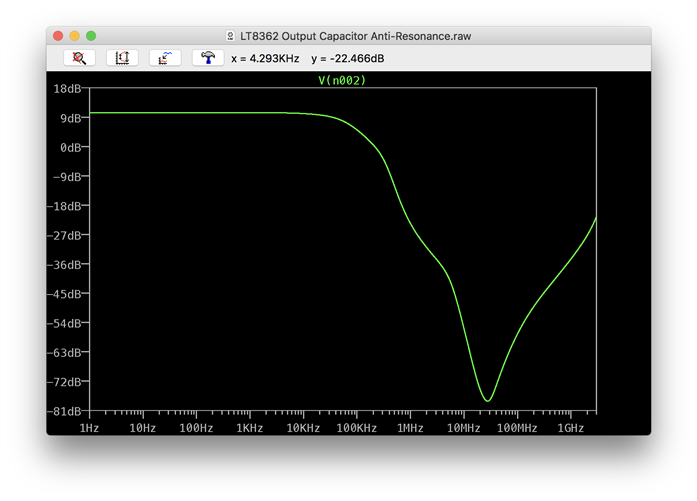 Here's the sim file for the above graph:

And to prove it's not Anti-resonance, here is the same test (no Series Inductance on C7 or C4), but this time without the ferrite bead and capacitor EMI filter on the output (still no major ESL spikes, although they are 107mVp-p, which is too large for my preference; but a ferrite bead EMI filter cleans that up quite nicely, as shown in the first output graph). 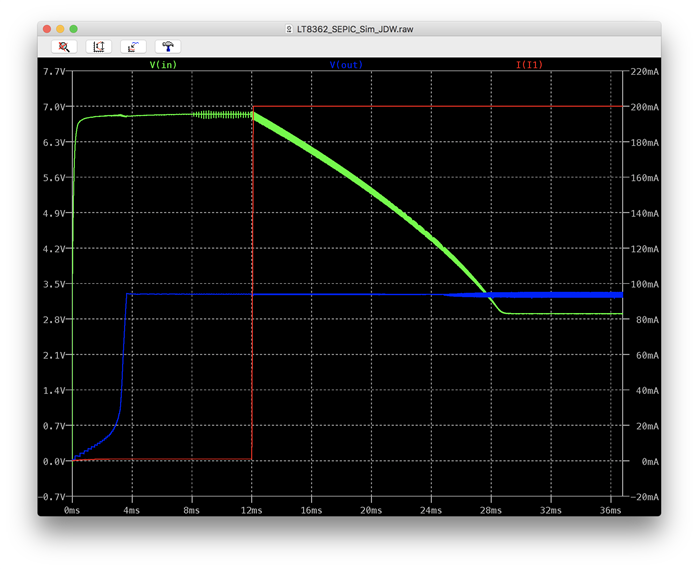 While no simulation software is perfect, and while an actual circuit on PCB will determine if a problem exists, I did expect more of LTSpice this go around, now that it's been 4 years+ since my last simulation of a very similar circuit (same switcher IC, just with a different output voltage).

I would appreciate hearing your thoughts on whether this ESL spike issue remains a bug in LTSpice, or if there is something in my circuit that I am overlooking which is triggering the large 1.5Vp-p spikes when Series Inductance is used on all of the output capacitors.

P.S. BUG REPORT: There is a crashing bug in LT Spice XVII 17.0.42 for MacOS. To repeat the bug, open my *.asc file (linked earlier in this post), then right-click on the Load (I1), click the "Additional PWL points" button, select the bottommost Time/Value entry, click Delete, click OK, click OK, and then the app will crash.  It happens every single time you try it.