The AD5930 and AD5932 are waveform generators based on Direct Digital Synthesis that can generate a frequency sweep when the CTRL input is pulsed. This frequency sweep is used in multiple applications from underwater sonar to electromagnetic spectroscopy (EIS). In some of these applications the transducers are distributed in physically separate units, each one having its own oscillator and with a common trigger signal. This configuration implies that the CTRL trigger signal is asynchronous to the system clock (MCLK). 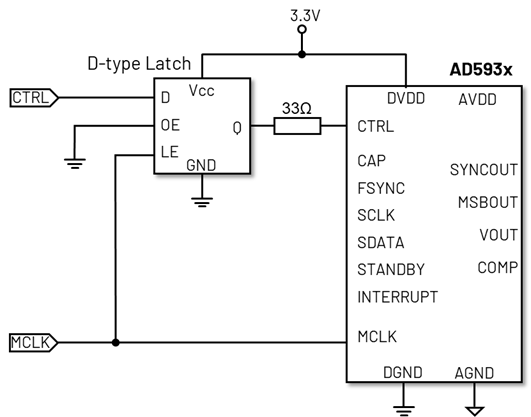 This circuit ensures that there is a constant time relation between CTRL and MCLK at the input of AD593x. The 33Ω resistor at the Q output is recommended if the line is a few cm long since the edge detector on the CTRL pin is sensitive to signal bouncing.

The D-type latch should have a maximum propagation delay under 7 ns from D to Q to comply with the following timing diagram. 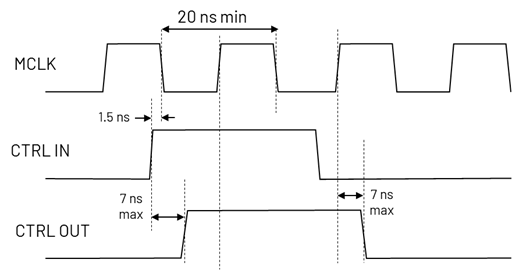 If CTRL IN changes when MCLK is high, the change propagates to CTRL OUT after the propagation delay (7 ns). The worst case is when CTRL IN just meets the setup time (1.5 ns) before MCLK goes low. In such case CTRL OUT changes 4.5 ns before the next MCLK rising edge (10 + 1.5 – 7).

If CTRL IN changes when MCLK is low, CTRL OUT changes after MCLK rising edge plus the propagation delay.

Depending on the relative position of CTRL IN to MCLK, CTRL OUT experiences a constant delay or a variable delay. If several chips are triggered asynchronously, the maximum phase shift between the DDS signals at the start frequency is:

Note that the maximum phase delay is the same as without the D-type latch because the DDS signals are played on each local MCLK.

A typical commercial D-type latch (for example NC7SZ373) with a supply range from 1.8V to 5.5V would meet logic level requirements across the entire AD593x operating voltage and temperature. A check for the compatibility of logic levels at standard supply voltages is presented in the following table.

The timing characteristics (-40°C to 85°C) of a commercial latch are given in the following table:

Using the D latch at temperatures higher than 85°C may require using higher supply voltage or a specialized low-voltage latch so that the propagation delay is below 7 ns.