I'm working on a project containing the AD9951 as frequency generator for 145 MHz. Previously to that, the AD9859 was used, but was swapped for the pin-compatible AD9951 because of availability reasons. The issue described in the following post applied to both devices.

The DDS chip is used to generate an approx. 145 MHz carrier (HAM-radio band). When turned on, it works nicely and generates a clean signal on the output transformer when viewed on the spectrum analyzer. 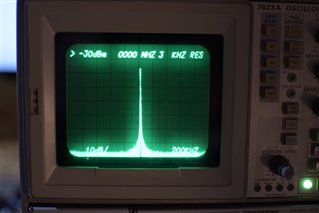 This trace, however, suddenly becomes much broader and unusable when the chip and the board heats up. And by heating I do not mean hundreds of degrees, it is not at all uncomfortable to touch by hand. 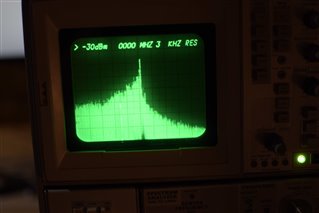 It is important to state that the whole setup was not touched at all between good and bad signal. The behaviour can be reverted to the first picture by placing a small heatsink on the AD9951. If however, a hot soldering iron is placed approx. 1cm above the heatsink (without touching, just to raise the temperature by a couple of degrees), the issue re-emerges.

First I was suspecting some oscillation issues with the 145MHz power amplifier on the same board, but switching off the power and disconnecting the amplifier from the DDS does not change the behaviour at all. The issue seems to be coming from the DDS itself.

The used schematic and board layout are shown here: 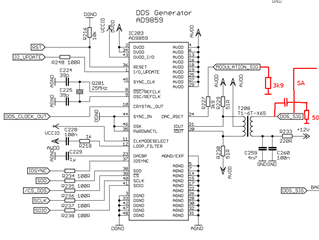 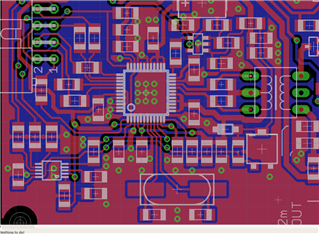 The spectrum analyzer is connected directly to the output of the transformer with a 4n7 coupling capacitor and a 20dB attenuator (for safety). Attempts were made to amplitude-modulate the DDS via the DAC_RSET pin, but this feature is currently disabled, so the 3k9 resistor is just connected to ground.

Now it is clear to me that it is probably hard to tell exactly what is happening on my board from a distance via a couple of pictures, but I just wanted to ask if this has been observed bevore in some situations or maybe I've left something obvious out. In case more information helps, I could also upload more design data, Settings, microcontroller code etc.

Thank you very much for your time in advance!