I have selected the AD9106 for inclusion into a piece of commercial test equipment I’ve designed.  I have the Eval board (AD9102-ARDZ & the EVAL-SDP matching processor) and have been working with them. I have it doing most of what I desire.  However, I have a few issues (see below) that I could use some explanations.

What I’m trying to do:

For reference, I’m using an external 8Mhz clock source and the Internal amplifiers turned on. 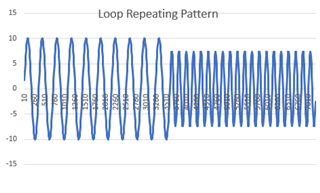