I have a problem with understanding the AD527x datasheet in the point, where the relation between code written to the chip and its actual resistance is explained: Table 1 states, that the wiper resistance is between 35 and 70 Ω. Later, in the paragraph PROGRAMMING THE VARIABLE RESISTOR, there is a formula for calculation the chip's resistance, this formula omits the influance of the wiper's resistance to the overall resistance. The next paragraph states, that in the zero-scale condition, a finite total wiper resistance of 120 Ω is present – this is significantly higher value, than 35 to 70 Ω (as stated in Table 1).

Could you please provide me clear instructions on how to calculate the resistance?

People usually get confused with wiper resistance. Let me try and explain it clearly as possible.

Wiper resistance is the resistance of the switch connected to the wiper terminal. Please refer the figure given below: 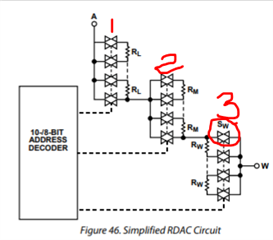 The on resistance of switch marked 3 is the wiper resistance. The value of this varies from 35Ohm to 70Ohm. It is calculated by the using the method specified in figure 39. 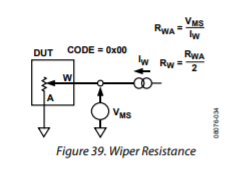 For AD5272/4, the idea value of Rwa(D)=D/256xRaw+2Rw. This based on the architecture specified in the the Datasheet. We usually omit the effect of 2Rw in the formula as its effect is small as the code gets higher. Also, Rw depends on various factors like temperature, operating voltage and conditions, which makes it difficult to accurately measure the value of it. That is why we omit it in the formula.

The maximum value that can be achieved is 99.6kOhm based on the formula used. This again depends on the Architecture used for the Digipot. There are few digipots where you can achieve almost true full scale and bottom scale value like AD5114.