Precision ADCs
Documents How does the device manage to achieve simultaneous sampling?

How does the device manage to achieve simultaneous sampling?

The newer devices on the family i.e. AD7606B, AD7606C-16 and AD7606C-18 manage to sample all channels simultaneously by having a dedicated signal chain on each channel, namely: a Programmable Gain Amplifier (PGA), a Low Pass Filter (LPF) and a SAR ADC driven by a common Conversion Start (CNVST) signal as shown in the functional block diagram.

Whereas the older generics, such as AD7606, AD7607, AD7608, AD7609, have one SAR ADC but the sample and hold is simultaneously managed on all channels before multiplexing into the ADC, as shown on the functional block diagram. 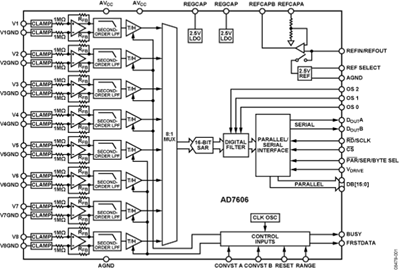