Currently, I am using an AD2S1210 EVAL Board via SDP CB1Z board to decode a Tamagawa resolver. It seems everything is working properly, but the decoded position is a 0-90 degree square waveform rather than a triangle waveform. I am writing to ask if anyone can detect my mistakes.

Here is the boards: 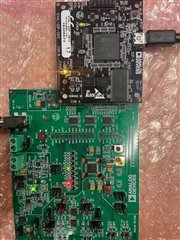 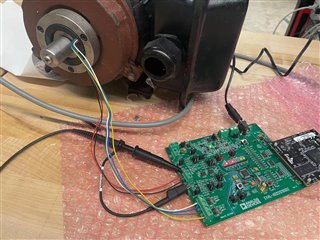 Then is the EXC-/EXC, SINE, COSINE waves read by the onboard terminals (the waveform is weird because I was using my hand spinning the shaft):

The measurement of the waveforms is listed on the right panel. Vpp of the cosine and sine waves is around 3.5V. 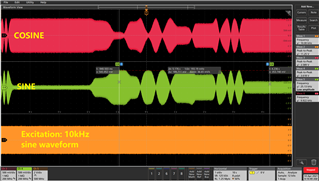 The incorrect position output is shown below. Four square waves can be observed within one 360 mechanical degrees. 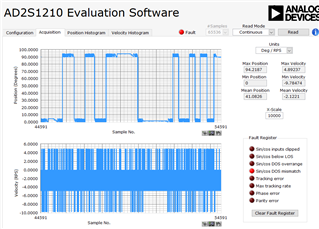 Then I attach my configurations for the board for you to refer to. I am using the 10kHz onboard excitation so I chose the 10bits resolution and 10bits resolver resolution. For phase lock, I tried both 44 degree and 360 degree, but the result is still wrong. The fault detection part is independent from the decoding part. So I think my setting will not affect the decoding result. The numbers shown below are obtained after reading the manual. 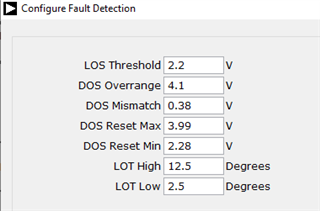 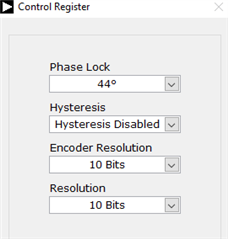 So please contact me if you spot my mistake from my setting! Many thanks!

My guessing solutions to the problem:

I am not sure if the amplitude is enough for decoding. Its peak to peak value is 3.5V which falls in 2.2-4V.

The excitation gain is 1.54 when I received the board. Then I try to put the link on A and C. However, the amplitude of the excitation is lower at C compared to B. And I don't know where to regulate the R so as to change the gain when the link is at A. Can anyone answer my question here?

Thanks for reading my problem! I need your help urgently!