I'm using the EVAL-AD7634 development kit, which input stage consists of two buffers using low noise AD8021 op amps. My signal is single-ended, so I would like to implement the proposed Single-To-Differential (S2D) driver from the datasheet of AD7634 (pag. 21), using these AD8021's, once they're strongly recommended.

My input signal range is -10V to +10V. Because its recommended that Rg and Rf from the proposed S2D driver should be kept as low as possible to preserve SNR, I used Rg = Rf = 330 Ohm, as it would require a maximum 30 mA output current from AD8021. According to its datasheet, the max output current is typically 70 mA (Vs = +-12V).

The recommended RC filter (15 Ohm + 2.7nF) was already available with the kit. I've already configured the kit to work in the bipolar range of -10V to +10V. A schematics is found below, where R11 and R10 represents the high-impedance inputs from ADC AD7634. 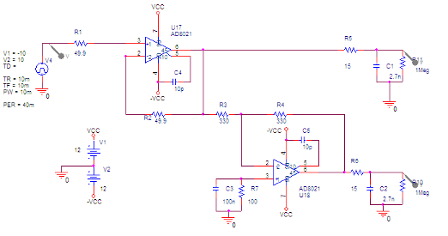 Well, it simply doesn't work properly! The output from both op amps follows correctly input signals from -4.5V to +4.5V, but a great and increasing voltage drop appears in the 15 Ohm resistor, implying in too much current and a different signal read by the ADC. When the input goes beyond 4.5V, the op amp which has a negative output (i.e., the one which is sinking current through the output port) starts to heat, because it's sinking the current from the other op amp plus the current coming from the 15 Ohm resistor.

I simulated it using the AD8021 PSPICE model provided by Analog Devices, and the results are attached in AD8021_simulation.png. They are very different from what I get in pratice. The signals in R11 and R10 follow the input signal well, but they don't reach 10V. Instead, they saturate at ~7.5V. And in this case, I can't see any significant voltage drop in the 15Ohm resistor, and the output current in the op amp's saturate at ~30mA.

I noticed that increasing the 330 resistors, the voltage saturates closer to 10V, but I would like to keep them low, in order to keep SNR low. I really don't understand why there is this voltage drop in my real circuit, and why the PSPICE model saturates at 30mA.

Could someone help me, please?