Here's a scope shot of the ADC when it's running, with a DC input that's slightly less than half scale. Top trace is /CONVST, second trace is DATA, 3rd trace is SCK and fourth trace is /CS. You can see the "LSB wiggle" happening on the 6th and 7th clocks read out. 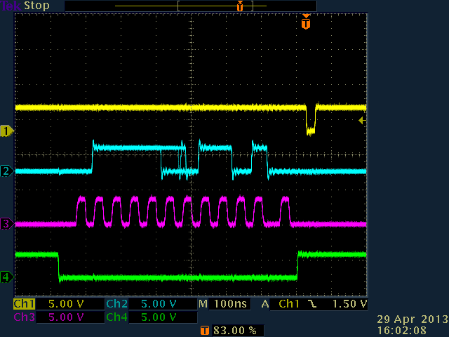 I am performing a reset on the ADC, as the datasheet suggests - here's a scope shot of the procedure. I keep the readout clock active but bring /CS high early. 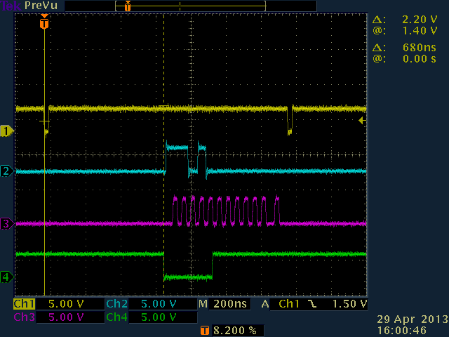 Some other notes on the design:

-VDRIVE is a separate 3.3V rail

-Timing is generated with a CPLD clocked at ~40MHz, the SCLK clock rate is 20MHz.

With the CPLD in reset, /CS and /CONVST are high, and SCK is low. When the CPLD is taken out of reset, CPLD reading begins at a ~720KHz sampling rate (~40MHz/55) and /CONVST goes low before anything else happens. During the first read from the ADC, /CS is set high early as shown above in the second capture. Subsequent reads have the /CS line driven normally as shown in the first capture.

I've been through the datasheet many times, trying to find something I've done wrong, but I can't find anything obviously wrong.