Just getting started here, and I need some assistance.

I’ve made some good early progress, but have somehow lost the ability to see any outputs.
Seems like a noobie problem, but it’s stopped me in my tracks.
What’s more perplexing, is I have had the outputs working, but now none are!


I’m using a single 1pps reference from a GPS receiver. I’m generating a number of disciplined clocks from this.

When the outputs were working, I was able to observe lock behavior.
It was not yet meeting my specification, but so far the performance has been good enough to see the process work. 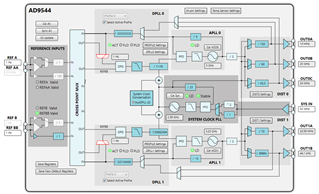 I’m using the CML single ended output, monitored on a scope.  Monitored this way does not show the cleanest signal, but it’s been more than adequate to see the generated waveforms, from multiple outputs.

I’ve tried every other manipulation that I thought might be useful, to no avail.

What am I missing?