Several blogs ago, I devoted a blog to a review of the book, Digital Woes: Why We Should Not Depend On Software. This blog is also a book review, but the book, Paper Safe: The Triumph of Bureaucracy in Safety Management, is much more recent with a date of October 2018. The full book is available on Amazon at a price of $8.17 for the Kindle edition. It is an easy read and thought-provoking. 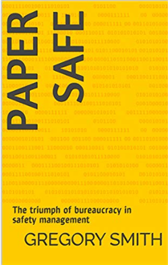 The book is focused on occupational health and safety as opposed to functional safety, and the authors experiences are based in the Australian mining  industry, but it is still possible for functional safety people to learn from it. It cites many interesting snippets from Australian court cases such as one concluding that “The act does not require employers ensure that accidents never happen. It requires them to take such steps as are practicable to provide and maintain a safe working environment”.

The author, Gregory Smith, gives the purpose of the book as being “to highlight bureaucracy in health and safety management, why it is a problem, how it arises and to suggest some solutions, some ways to de-clutter health and safety management”. The authors definition of bureaucracy is something that “has lost its connection with purpose”. So, a safety rule which says you must hold the handrail while going up or down a stairs might be a bit patronising but since it does serve a purpose is not bureaucratic. He gives an example which I came across myself last year while taking a train near our corporate headquarters in Norwood, Massachusetts.

While waiting to get the train at Dedham Corp Center Station, I started talking to a policeman who was wearing a short-sleeved shirt who told me that it was still not the date where they could change to their winter uniform. Having such a policy without regarding to the weather conditions would meet the authors definition of bureaucracy. A more serious example is when the key metric becomes compliance to the process rather than achieving the aims of the process. So, for example checking that nobody changes their uniform too early rather than everybody is dressed appropriately for the weather conditions. A similar example by the author refers to the wearing of hard hats whenever you go outside. Such a rule is easier to enforce than a risk-based criterion for wearing a hat. Another example might be measuring the success of training by the number of people who have completed the training rather than evidence that they are using the training. But the author does point out that we should not treat safety management as bureaucratic “simply because it is prescriptive”.

Smith also argues against “trivial health and safety requirements” which he says, “are likely to disengage your workforce from your safety message and create a perception that all health and safety requirements are trivial nonsense”. Such rules might involve how to do things that people manage to do perfectly safely everyday outside of work. The author does point out however that if there is something physically wrong with the stairs the author is obliged to fix it. Another rule given by the author is a rule “to put lids on coffee cups”.

He talks about cases where people need to do a risk assessment every time before they start a job and how if it rates above a certain score you need to get higher management approval to proceed. It turned out nobody ever gets that risk score and by mandating the same risk assessment must be done day after day people stopped engaging their brains and were inclined to copy the previous risk assessment. Using the number of completed risk assessments as a metric then becomes meaningless. In my own past I have seen the same debate with FMEA where if your RPN (risk priority number) was above a certain value you were supposed to take action which gives a great incentive to keep (make sure that the analysis gives the conclusion that) the RPN is below that value. A more successful and honest approach might be to say you must tackle the risks starting with those with the highest RPN but it does beg the question as to when you then stop. Such a rule can however be hard to understand if you are not sensitized to the issues with mandating a maximum RPN.

Conversely the author also warns against mandating too much simplicity such as a rule that all health and safety procedures had to be less than 4 pages long and where a given process did require more detailed instructions an enterprising author complied by using a smaller font. He also warns that where written rules are not enforced having the rule could actually become an aggravating factor if someone does get hurt rather than the process being a mitigating factor.

Other takeaways from the book include:

While a little off topic for functional safety people, this book can be read over several hours and should be compulsory reading for anybody putting development processes in place to remind us to minimize the work burden we place on others to only that which add values. For a company like Analog Devices, this may mean allowing our developers to claim as much credit as possible for the things they do as part of the standard ISO 9001 compliant development processes used for all products. The author warns that once you go down the road of bureaucracy, the opportunities to add more rules is endless.

An interesting and related video is “Safety Differently | The Movie” which advocates giving autonomy in safety. However having read books such as the “Checklist manifesto” even the most educated can resist having their creativity limited by safety rules even when it turns out those safety rules have immediate and dramatic benefits (lookup the WHO Surgical safety checklist for more).  Another good link, relevant to safety processes and rules, is to the website of the Plain English campaign.

Finally, below is a memo from Winston Churchill from 1940 on keeping things brief. 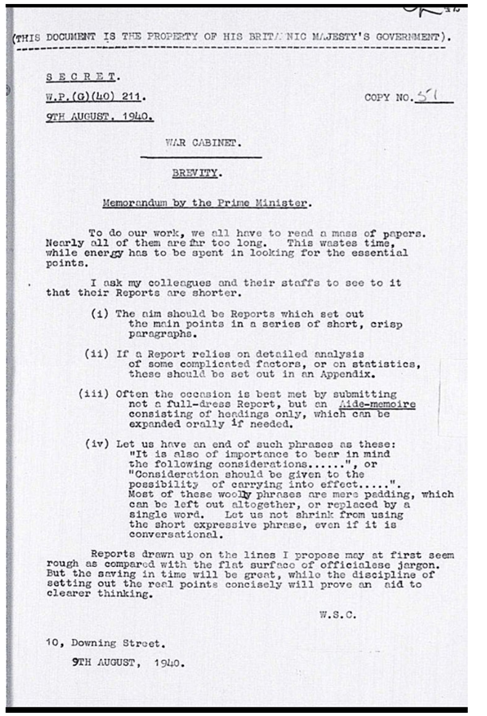