Reducing noise in electronic circuits has been a challenge for designers since 1844 when, from the Capitol dome in Washington, D.C. Samuel Morse tapped out “What Hath God Wrought” in Morse Code to a waiting audience at Baltimore’s Union Station. Static Noise by relays in the circuit to static and naturally occurring lightning (among other sources) threatened to garble Morse’s inspirational message. (“Wt Hh G Wrgt” doesn’t have the same ring of history, does it?)

Morse’s system was electromechanical, using transformers to relays to carry his code long distances over wires. Fully electronic amplifiers (inside vacuum tubes) were perfected 70 years later but, due to glowing hot elements inside, they were inherently noisy. The development of semiconductors (in which no appreciable heat gets generated) was welcomed by designers of communication systems. Ironically, as semiconductors evolved and got faster the printed circuit boards on which they were placed produced new sources of noise because the metal connections, carrying fast signals between parts on the board, can act like little tiny antennas! They produce a type of noise called EMI, short for Electromagnetic Interference. EMI presents an especially frustrating challenge in circuits where components require voltages lower than that being supplied to the board. Drop-down methods made with “passive” parts (those that do not require their own power supply) are not terribly efficient, and important criteria especially in battery-operated systems where it is critical to save as much energy as possible. Early power supply designs using semiconductors generated a lot of heat, meaning the box in which they were located needed vents or fans (often both.)

The invention of the “switching power supply” in 1958 began a revolution in active power supplies for semiconductor-based products. Later, as noted in an IEEE paper on computing hardware, Steve Jobs selected a switching power supply for his groundbreaking Apple II in the 1970s because it “switched the power on and off… thousands of times; this allowed it to store the power for far less time, and thus throw off less heat.” However, as ADI alumnus Tony Armstrong noted in his paper Silent Switcher Devices Are Quiet and Simple to be the most effective, switching power supplies must run at a much faster speed  - switching on and off about two million times a second. Which, at that speed, creates EMI. Tony writes “Filters and shielding can also be employed, but this costs more in terms of external components and circuit board area.”

Silent Switcher® to the rescue

Analog Devices has been designing and manufacturing compact all-in-one-package switching regulators for a while now. Even with the challenges stated above ADI’s Switching Regulators are very efficient and generate much less EMI than other single-chip solutions. A few years ago, ADI announced a new breed of switching regulator called the Silent Switcher. Compared to conventional regulators, the Silent Switcher line simultaneously enables low EMI and high efficiency at high switching frequency.

How they reduced EMI – the bane of power supply designers – is so clever I just had to show how they did it. What you need to know is magnetic fields have direction (due to something called “the right-hand rule”… but we’ll skip the nasty details of the math and physics.) By placing inputs to the regulator on opposite sides of the chip, the magnetic fields are in opposite directions, and so they cancel each other out. 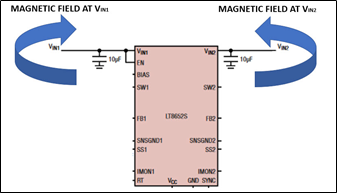 Like a movie that does well at the box office, Silent Switcher technology was so well received that ADI produced a sequel, Silent Switcher II. The recently released LT8652S is the newest member of this line. To make Silent Switcher technology as easy to use as possible, ADI engineers integrated components into the LT8652S which not only simplify the task of designing in the part, but also further reduce the already-low EMI of the previous generation of Silent Switchers. The LT8652S is a brilliant choice for designers of the next generation of automotive, communications, and data server applications. (If you’re not a designer or engineer and want to impress someone who is, tell them “the LT8652S is a dual-channel silent Switcher 2 step down converter supports an input range from 3V to 18V while delivering  up to 8.5A from both channel and 12A per channel.”)

For more details or to download the datasheet and order an evaluation board, please visit the LT8652S product page.