When Lee de Forest invented the first electronic amplifier tube (the Audion) in 1906 the iconic inventor gave us the foundational invention needed to kick-start the development of long-distance telephone, radio, radar, and the first computers. Since the product we’re going to talk about today can be described as a combination of radio and computers, we’re going to look briefly at their individual histories and then talk about the moment they became intertwined, and how Analog Devices has advanced this mix of technology to make it easier to implement in a wide range of applications.

It started with radio...

For decades the insides of radios were filled with tubes, coils, capacitors, resistors and other discrete (individual) components. There were variations in the architecture – the way a radio frequency (RF) signal was picked up, how the desired signal was isolated from all the other signals arriving at the antenna, and eventually amplified for our listening pleasure. Early radios were usually large floor models and could have upwards of a dozen vacuum tubes, but advances in the 1920s and 1930s led to smaller tubes tubes combining two or three functions critical to the reception of AM radio signals. Tube counts decreased and radios got smaller. After the Second World War the typical consumer radio was a tabletop with just five tubes. 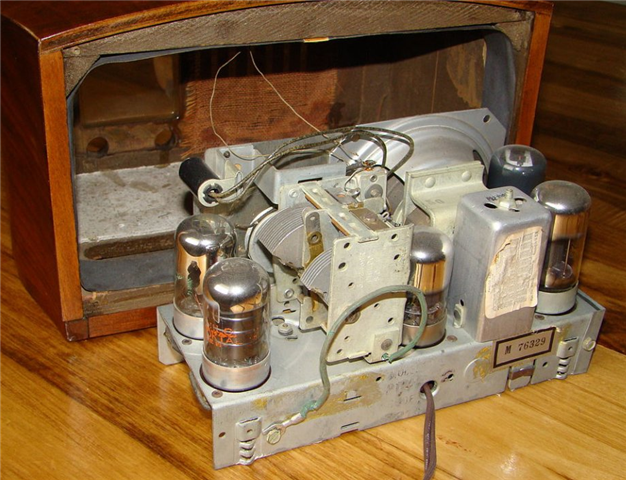 The invention of the transistor made smaller radios possible. Although the basics of the receiver did not change, transistor radios were big sellers in the 1960s and 1970s. This model, from Japan, was promoted as a battery-operated five transistor radio so small it would fit in a shirt pocket. 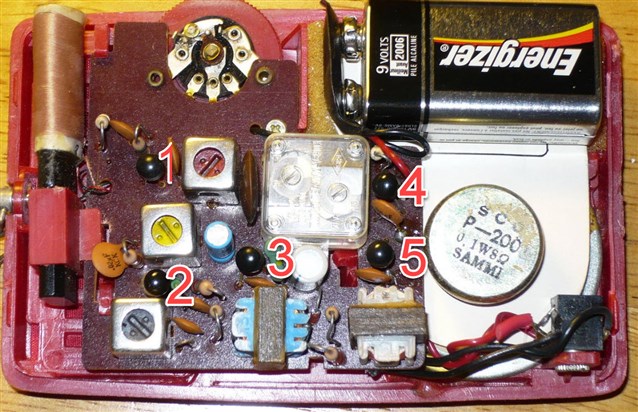 The ones I just mentioned were built expressly for receiving AM (amplitude modulation) radio stations operating in a specific band of frequencies here in the States (550 kHz to 1600 kHz). To hear stations on a different frequency band or to hear stations broadcasting using FM (frequency modulation) one would, at the very least, need to add new hardware (coils, capacitors, and other components). These extra parts increased the size and cost of multi-band and multi-mode radios, such as this still much-prized Grundig 2450U tube radio from 1965. 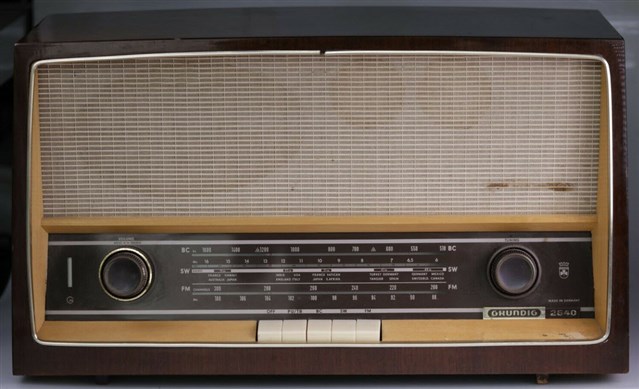 Now let’s look at electronic computers, which began in the 1930s as simple adding machines using tubes and relays. Advances came quickly during the Second World War thanks to the urgent need for calculations required for code breaking and building the atomic bomb. Here in the States after the war, private companies such as Remington-Rand and IBM (their research often funded by the military) worked to develop computers for business, with a far-reaching goal of bringing them into the home. One of the big questions facing computer designers back then was whether to use voltage levels to represent numbers, or to convert those signals, which are analog (meaning continuous) into digital (either 1 or 0 of binary code). With a few exceptions digital won, because once it was figured out how to convert analog signals into digital, the resulting computers provided both speed and precision analog computers could not. Just as with radios the transistor would replace tubes and bring reductions in size and increases in the speed to computers. The integration of multiple transistors onto a single piece of silicon brought even more dramatic improvements. (Thanks, in part, to integrated circuits – ICs - the dream of home computers started to become reality in the 1970s.)

We have already talked about legacy tube and transistor-based radios being limited by their hardware to specific frequencies and modes. Computers, on the other hand, can be programmed to perform vastly different functions such as tracking company payroll or processing calculations for launching spacecraft; all with the same hardware. But computer-based radios which could be programmed in software to receive and transmit in any waveform (AM or FM, for example) on many frequency bands were for many years limited to blackboards and whitepapers, due to a lack of Speed and Bandwidth. Let’s discuss:

Speed is easy to understand: the faster a computer operates the more instructions of computer code it can process in a shorter period of time. To explain bandwidth, I like the garden hose analogy. If the garden hose to which a spigot is connected is only one-half inch in diameter the amount of water coming out of the hose at any given moment is limited. Double the width of the hose and you double the amount of water that can pass through. The width of the hose is analogous to bandwidth.

By the late 1970s computers had j…u…s…t… enough speed and bandwidth for researchers to begin to move some SDR concepts from the blackboard to the printed circuit board, with development accelerating during the 1980s and 1990s. Slowly, but surely, radios were being liberated from the constraints of their hardware. The inexorable increase in speed and reduction in size of semiconductor technology (thank you, Moore’s Law) drove other benefits. The Wikipedia page on Software Defined Radio dryly notes how an SDR radio in 1994 could “fill up the back of a truck” but less than twenty years later an entire SDR system could be found on a single chip!

Using its expertise in both high-performance data converters (quickly and accurately digitizing analog signals) and wideband high-frequency RF and Microwave ICs (able to pass large volumes of video, voice and data) ADI produced its first single-chip SDR solution in 2013. The AD9361, the first member of this transceiver family, was well-received and quickly designed into low-power small cell and base station transceivers and high-performance test equipment. Oh, and satellites: The AD9361 is currently on its way to Mars aboard a NASA spaceship. (What better endorsement of reliability than being sent tens of millions of miles away where no repair is possible.)

, featuring increased bandwidth, range and performance. This extraordinarily complex product integrates a wideband RF transceiver into a system-on-chip radio solution, replacing as many as twenty components if built from scratch. Yet, thanks to a partnership with MathWorks (leaders in modelling and simulation software) the Radioverse SDR solution is actually easier to implement than all previous solutions. Using MATLAB and Simulink a designer can simulate their entire application on a PC, saving countless hours and resources building and testing hardware. 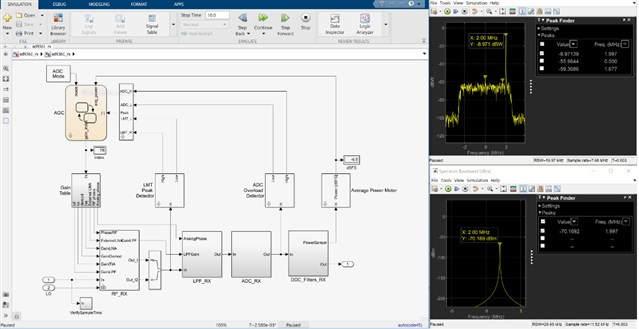 Today, 114 years after Lee de Forest’s Audion tube shook the electronics world and started a revolution in radio design, Analog Devices has released a new, highly advanced software defined radio solution, the ADRV9009. At the heart of the ADRV9009 is a transceiver with the extreme bandwidth and performance needed for 5G. (Remember our garden hose analogy? At 450 MHz, the ADRV9009 has eight times the bandwidth of the AD9361, which itself was state-of-the art when released only seven years ago. Shows you how fast things are changing, and how difficult is the task of keeping up with the State of the Art!)

Built inside the ADRV9009 chip are dozens of radio functions - mixers, filters, and data converters to name a few – usually requiring their own space on the circuit board. Along with its 5G-capable high-performance transceiver the ADRV9009 also includes a second receiver, called an observation receiver, whose job is to correct for variations in signal strength using a complex mathematical process called “digital pre-distortion.” Don’t worry, we’ll skip the math. The important thing to know is the process results in a cleaner, more reliable and accurate signal.

So, what can designers of the next generation of software defined radios do with the ADRV9009? The sky – maybe Mars – isn’t even the limit. To help speed the development of those extraordinarily complex systems, ADI has also developed the ADRV9009-ZU11EG RF System-on-Module. This powerful development platform contains two ADRV9009, meaning there are four wideband transmitters and receivers as well as other components to handle the large amount of data coming back from the transceivers. The module also includes the ability to communicate locally with both USB and Ethernet connections. 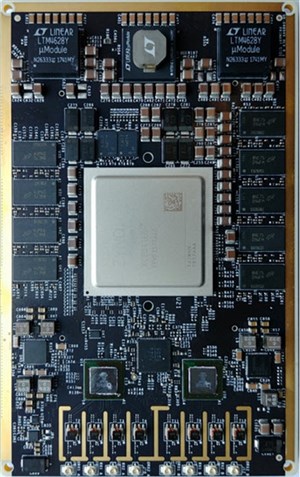 We cannot be sure, but it is likely not even Lee de Forest could imagine a day when radios would be freed of constraints by their hardware and would be programmed to receive any kind of signal at almost any frequency. Analog Devices’ ADRV9009 is the latest in string of successful Software Defined Radio solutions with the tools – such as the ADRV9009-ZU11EG RF System-on-Module - to help product designers speed their design, produce the highest-performing radios, while getting to market faster. Learn more on the ADRV9009 product page and the ADRV9009-ZU11EG RF System-on-Modul page. 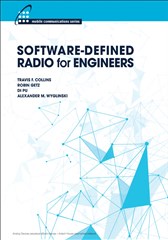