Economies of Scale is so easy to understand even those of us who have trouble balancing a checkbook can grasp the concept. Increasing output can lower the cost of production, thereby increasing profits and lowering the price of goods to the consumer. This can apply as much to a factory manufacturing toasters and solar arrays producing electricity. In factories, large precision cutting machines, long conveyer belts and hundreds of other supersized high-voltage machines and devices are often noisy and can cause data glitches in control systems. Solar Arrays have their own challenges. They produce electricity in the form of direct current which then must be converted into alternating current so it can be used in our homes or distributed to the grid. This requires something called an inverter. Inverters are also needed to create the voltages needed for motors, the kind driving conveyor belts or moving the heavy armatures of large robotic assemblies in those factories we just mentioned. As inverters get larger the potential for interruptions due to data glitches grows.

Large motor-driven assembly devices such as the one we see here may look brutish, but the motors within must be controlled precisely to run smoothly, with exact control of the speed and torque. Failure to precisely maintain motor performance can result in damaging vibrations to these very expensive manufacturing devices. Known as “torque ripple” the long-term effects can be devastating on the motor, potentially damaging other expensive parts of the manufacturing device and forcing a shutdown of the assembly line. 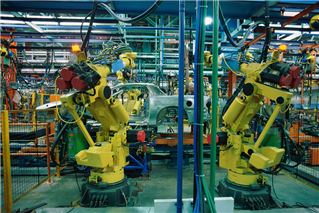 Such was the challenge to a team of designers at Analog Devices; develop a more robust analog-to-digital converter (ADC) for use in monitoring and control devices in high-voltage environments. An ADC is needed because motors and inverters are controlled by varying either current or voltage, which are analog, or continuous, real-world signals. Computers and other devices used by maintenance and management personnel are digital, meaning they use binary language (ones and zeroes) to communicate. An ADC is kind of like a translator between the analog and digital world.

The ADuM770x family overcomes the challenges of precise motor control several ways. It starts by including ADI’s breakthrough iCoupler® digital isolation technology which, by isolating the converters from noise, provides a robustness preventing the corruption of data inherent in other solutions. Designing in ADI digital Isolation mean some members of the ADuM770x family are rated to 750Vrms.

Analog Devices’ ADuM770x family are also the only isolated ADCs to include a Low Dropout Regulator (an LDO is a power management product necessary for the smooth operation of the ADC) constructed without bulky capacitors allowing the ADuM770x family to be constructed in a small 8-lead package. Along with supporting the higher operating voltages the built-in LDO eliminates the need for a number of high-precision power components. This saves the designer’s time, reduces precious space on the circuit board and lowers the power consumption for the controller circuit. This family of integrated solutions are also less affected by changes in temperature, adding to their reliability. The ADuM770x family has received safety and regulatory approval from United Laboratories (UL), as well as other recognized regulatory and certifying organizations. Learn more about the benefits of the ADuM770x family by visiting our web site here.