Today’s story is how the road to success required Analog Devices to think smaller.

As I type this blog it is exactly 23 years – June 2, 1997 – since I began my career at ADI. I can hear my 1997 self asking “Blog? What’s a blog?” Sure, there was an Internet back then, but on a scale much, much smaller than what we have today. The picture below, with all those interconnected boxes shows why one nickname for the Internet is “the web.” The boxes, marked “CO” (short for Central Office) are responsible for receiving and distributing data across the web. Each CO has the additional task of converting the electronic data from computers into an optical data stream that can be sent down the optical fiber cables to other COs. 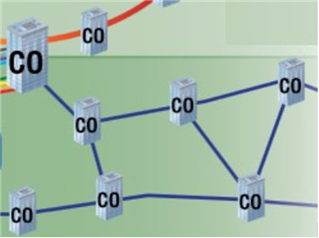 Just twenty years ago the bandwidth between COs – a measurement of how much data could pass between them – was 1 Gigabit per second (one billion ones and zeroes passing a single point every second). Twenty years later bandwidth has exploded to 400 GSPS, and it’s still growing. The device tasked with converting the electronic data into optical data (and then back) is called an optical module. Over the years, as bandwidth and speed between the CO have increased, the size of these modules have decreased. Manufacturers of optical modules have some leeway on how they design their modules, but all must adhere to a standard size, location, and arrangement of input and output pins. 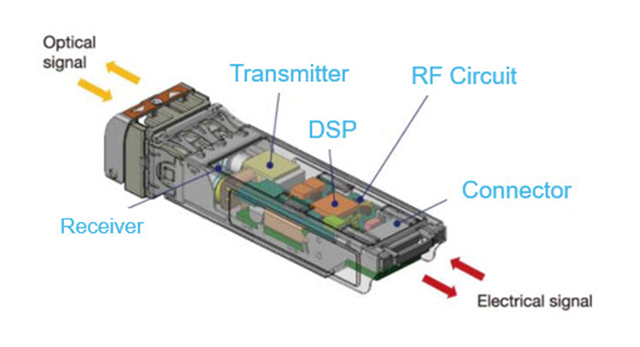 Within this small space optical modules are packed with many components, including several integrated circuits. At the heart of an optical module is a Digital Signal Processor (DSP). The DSP requires different voltages, even though the Optical Module standards say it will only get a single 3.3-volt supply. This presents a challenge to optical module designers who not only have to make those modules very thin (8.5mm, or the height of five nickels stacked together) but also able to produce multiple supply voltages from one.

To solve this design challenge, ADI has produced the LTM4691 DC/DC regulator, packed with features that set it apart from any other optical module power supply product. From the CO supply of 3.3V the LTM4691 can produce two voltages, with each one programmable anywhere from 0.5V to 2.5V. But what really sets this new regulator apart from all the others is its incredibly small size.

In this cross-section of a typical optical module we can see how the DSP, the transmitter and receiver (along with other components) must fit on top of a printed circuit (PC) board inside the module. It’s pretty cramped up there, so the folks who lay out where components will sit are often challenged by lack of space. The lack of room also stifles their desire to add more features to the module, since that would require more components and it’s already too crowded up there.

ADI engineers saw an opportunity where other regulators could not go – under the board – where clearance is just 1.4mm (less than the width of a U.S. penny). The new LTM4691 is so small, less than 1.2mm thick, that it fits underneath the PC board with room to spare!

As you can see by the photo above, the LTM4691 may be as thin as a dime, but by freeing up valuable real estate on optical module PC boards, its impact on data communication is huge; as more features and greater speeds will be enabled by our new regulator.  For details on the LTM4691, including how to get free samples or order an evaluation board, please visit the LTM4691 product page.