One of the reasons to start 2021 with this blog is that in 2020 Analog Devices released the world’s first safety certified data converter the ADFS5758 4/20mA output DAC (digital to analog converter). I had been meaning to do this blog ever since. The ADFS5758 takes in a digital value from a uC and outputs a current in the range of 4/20mA.

In future blogs I might cover the advantages of using a certified IC or do in-depth look at the on-chip diagnostics of the ADFS5758 or even what goes into releasing a safety certified IC, but in this blog, I will concentrate on the functional safety of 4/20mA networks.

Let’s start with a typical safety function which consists of sensor, logic and actuator blocks. Such an example is found in many industrial functional safety standards and one such example is shown below from IEC 61784-3. In this picture 4/20mA would serve as the connection between the sensors and the PES and the PES and the actuators. 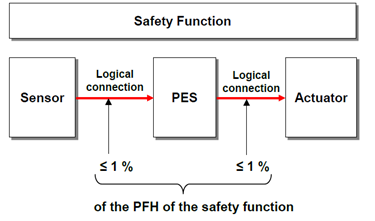 In process control applications it is common for the sensors and actuators to be located up to 1km from the PES (programmable electronic system) and reliable communication is necessary to assure safety is maintained. 4/20mA networks have been used in such systems for well over well 30 years and perhaps even 50 years. Before that I believe the signals were transmitted using pneumatic and hydraulic signals (for anybody less than 50 years of age I kid you not). In fact, 4/20mA contains some throw backs to those earlier communication means e.g. live zero.

Two examples of a PES are a PLC (programmable logic controller) or a DCS (distributed control system). Typically, each of these contain analog input and output cards. A DAC (digital to analog converter) in the analog output card of the PLC will convert the digital value from the PLC into a current in the range of 4 to 20mA. In the analog input card a 250 ohm resistor is used to convert the 4/20mA current into a voltage which is then converted into a digital reading by an ADC(analog to digital converter) such as the AD7124. A PLC block diagram is shown below from IEC 61131-6.

Simplifying further we arrive at something like the below and as you can see each 4/20mA connection typically requires an ADC and a DAC. 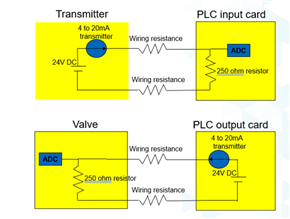 The voltage drops caused by the wiring resistance should not affect the measured values in either case. Other advantages of 4/20mA include good EMC robustness and the fact that if your sensor can run from < 3.6mA then the loop can also supply the power (microcontrollers designed for just such applications include the ADuCM360).

Let’s look at the transmitted current values in more details. The ranges below are from NAMUR NE-43 standard where the valid signal range is 3.8mA to 20.5mA with the intention that currents from 3.6mA to 3.8mA and 20.5mA to 21mA can be used to transmit diagnostic data but signals < 3.6mA and > 21mA indicate a failure. Particular significant is that fact that an open wire will give a current of 0mA and so is easily identified as a failure (dangerous detected). This is a key advantage of a live-zero signalling method (4mA rather than 0mA represents the zero signal).

Other standards such as those from ISA 50, IEC 60381-1 and IEC 61131-2 define slightly different current ranges so let’s use 4/20mA from here on out. There used to be applications which used +/-20mA, I think for motor control, but you don’t see that much anymore.

Another (on top of checking current is in the range 4 to 20mA) diagnostic available for a PLC analog output card is to measure the returned current. If using only 2 wires all the current that goes out must come back again. If you expected to transmit 10mA and you receive any current other than 10mA on the return, then something is wrong. For instance, this could be due to a problem in the DAC used to generate the current. Measuring the return current requires an ADC in the analog output card along with the one in the analog input card this is great news for Analog Devices. The total error of the ADC and any sense resistor will dominate your claimed safety accuracy which is often in the range of a couple of %. If you buy the ADFS5758, ADI has already done all these calculations for you but that’s perhaps for another blog. 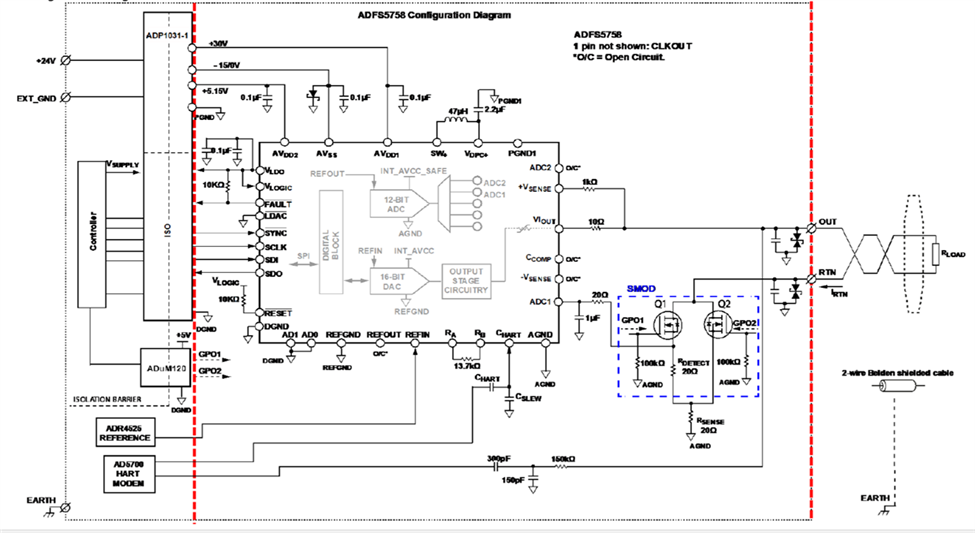 The ADFS5758 DAC contains an on-chip ADC to measure the returned current. Having the ADC on-chip allows for a higher density analog output card and higher reliability (the ADC adds about 10% die area but still fits in the same package as the DAC so no added PCB area). Having such an on-chip diagnostic is great even for non-safety but if you want to claim credit for it in your safety case the IC needs to have been developed to IEC 61508. The ADFS5758 was developed in compliance to IEC 61508 including consideration of sufficient independence between the DAC and ADC to allow for this.

If you used a standard DAC rather than a DAC with an integrated ADC you could use an analog input card from the PLC in parallel with the analog output card to measure the return current but this is not very efficient in terms of resource usage. The analog input pins to allow monitoring of the loop current is one of the key features of the ADFS5758 over its non safety counterpart the AD5758. Both contain the ADC but on the standard part the on-chip ADC can only monitor on-chip temperature and run on-chip diagnostics.

Looking at the ADFS5758 schematic also brings up the issue of a safe state. If the diagnostics require the safety function to go to its safe state (fault reaction function) then you could program the output of the DAC to 0mA, but a safer means might be to use an SMOD (secondary means of disconnection). In the schematic given above there are two SMOD switches to allow testing of the SMOD. Both allow the current through a common 20 ohm resistor to be measured and one has an additional 20 ohms. This allows the SMOD switches to be tested without interrupting the current and further tests the ADC in situations where the return current might be set and then not changed for a long time.

Most of the above concentrated on the analog output card but what about the analog input cards used to measure 4/20mA signals. Here an interesting diagnostic is to put two sense resistors in series and put an ADC across each one and compare the outputs. Diagnostics by comparison is good for a diagnostic coverage claim of up to 99% ( see IEC 61508-2:2010 table A.7 and A.13 ) but issues related to synchronizing the ADCs, what happens if the 4/20mA signal is a fixed value and systematic capability will still remain. I might expand on these concerns in a future blog. 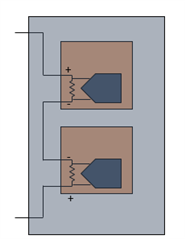 Below is an implementation for a single isolated per channel solution based on the ADFS5758. This is from the ADFS5758 datasheet. Keeping the component count low means the complexity of the solution is low (everything in the ADFS5758 being covered by the ADFS5758’s certification) and the reliability high. The ADP1031 is a companion power supply chip suitable for use with the ADFS5758. 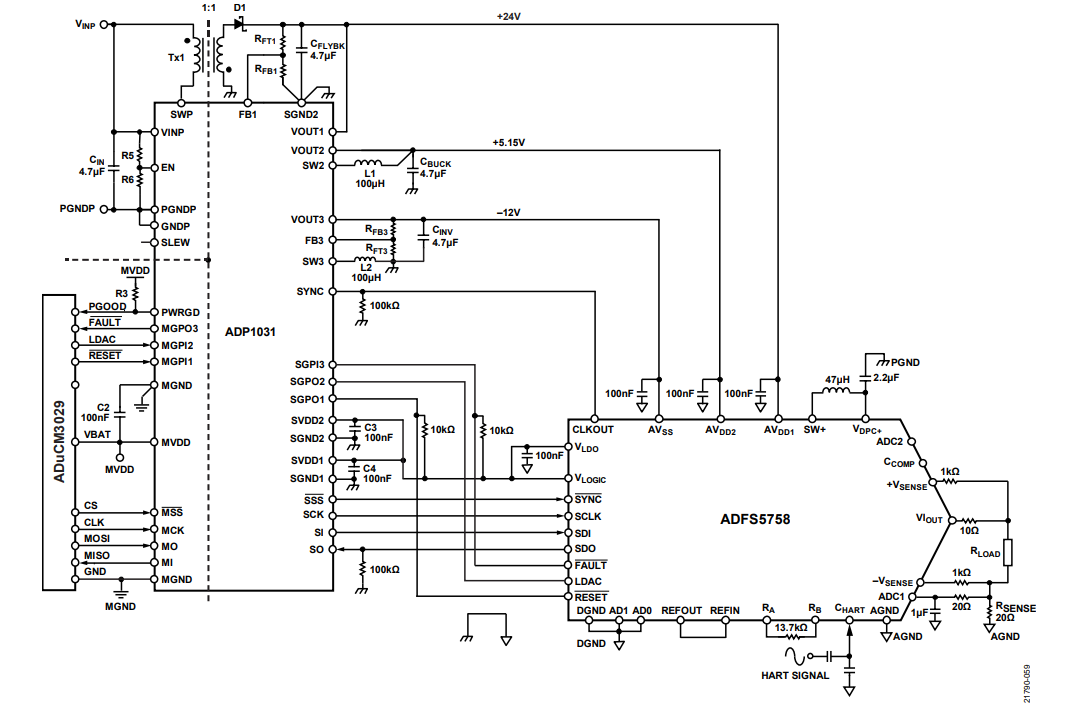 I’m with Analog Devices for over 30 years and even 20 years ago people were talking about the demise of 4/20mA. Analog Devices now have a range of ICs designed to allow Industrial Ethernet connections over a distance of 1km and I understand these might are able to operate over the same wires as used for 4/20mA and so can act as a higher bandwidth replacement without having to completely rewire you plant. However due to its wide user base I think the demise of 4/20mA will be slow and gradual and it will still be common even in another 20 years.

In this blog I didn’t get to cover HART(use to superimpose a second channel for non-safety data on top of the 4/20mA currents by superimposing a +/-200uA modulation on the 4/20mA signal), the history of field busses or redundant architectures for high safety and high availability, intrinsic safety, cyber security advantages of 4/20mA, synchronization advantages of 4/20mA, safety advantages of analog over digital but perhaps that will be for another day. Hopefully you still found enough in this blog to be interesting.

For more information, see the below: