In Part I of this series I wrote about a part of Boston’s Central Artery/Tunnel Project (a.k.a. the Big Dig.) The goal at this interchange south of Boston was was to connect the Massachusetts Turnpike (from the west,) the Southeast Expressway (from the south,) a tunnel to Logan Airport (from the east,) and a new tunnel through downtown Boston (to the north.) Originally budgeted for $400 million politics, neighborhood activism and soft soil conspired to consume the entire budget for just this small section of the highway behind South Station: 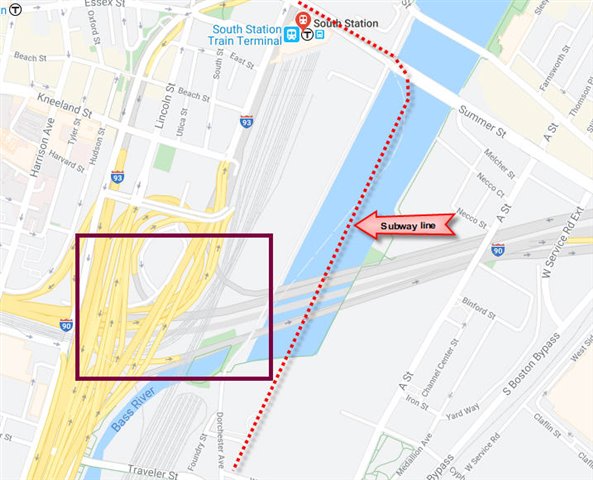 Map showing the extension of the Massachusetts Turnpike to Logan Airport

In Part I, we also learned how engineers, needing to build three highway tunnels under the railroad tracks behind South Station, were unable to utilize grout mixing to stiffen the unstable soil. Freezing the soil and jacking the I-90 tunnels got them under the tracks, but only to the western edge of the Fort Point Channel - they still had to cross the 400-foot-wide channel to connect those three tunnels to a new Logan Airport tunnel being built in South Boston.

One relatively inexpensive option considered for the channel crossing was to use pre-fabricated tunnel sections. This method had already been selected for the three-quarter mile-long harbor tunnel from South Boston to Logan Airport (later named for baseball great Ted Williams.) Twelve pre-fabricated binocular-shaped tunnel sections, such as the one seen below, were lowered into an underwater trench dug between South Boston and Logan Airport. 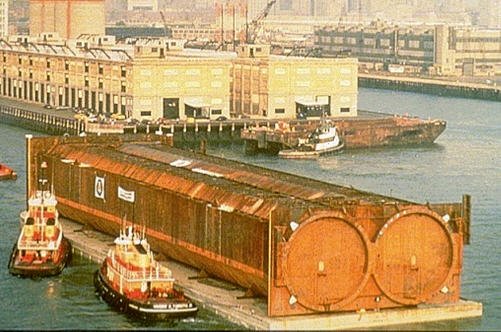 One of the twelve sections of the Ted Williams Tunnel

Back at Fort Point Channel, pre-fabricated tunnel sections were the obvious first choice for the crossing. Unfortunately, three low-profile bridges (one of them a turn-of-the-20th-century relic preservationists are still arguing over) quickly put the kibosh on that option. Another option was to bore through the bedrock underneath the channel. Not only was that expensive but impractical, anyway, since the grade of the turnpike coming from the west couldn’t be made steep enough to drop down to bedrock in such a short distance.

Everything Old is New Again…

To solve the problem of connecting the Mass Turnpike with the Ted Williams tunnel, the engineering minds at the Big Dig found a solution first used over 900 years ago in China. It’s called a dry dock. On the eastern side of the Fort Point Channel they built a connected series of circular structures which formed a cofferdam. Once the water was pumped out, engineers had a 1,000-foot-long, 300-foot-wide and 60-foot-deep drydock in which they could build sections of tunnel. The tunnel sections were as large as 414 feet long, 174 feet wide and 27 feet high. All were built with watertight seals on both ends, so when the cofferdam was breached and the dry dock (technically now a “casting basin”) filled with water, the sections would be floated into position in the channel. Do this three times and you have yourself a tunnel. Easy, right?

Not quite, because running down the center of the Fort Point Channel is a subway line, built there in the early 1900s.* The Massachusetts Bay Transit Authority (the MBTA, descendant of the MTA, who gave us wayward Charlie on the MTA back in 1948) took a rather personal interest in the tunnel sections, as they would pass only a few feet above their tunnel. Big Dig engineers calculated 110 concrete columns, anchored in bedrock, would be required to support tunnel sections, the heaviest of which weighs more than 50,000 tons. With almost no margin for error, these huge highway tunnel sections were slowly floated over the subway tunnel. Satellites and laser-based state-of-the art theodolites provided the precision necessary to prevent the disaster of a breached subway tunnel. (Engineers were confident, but the subway line was still shut down during the operation.) 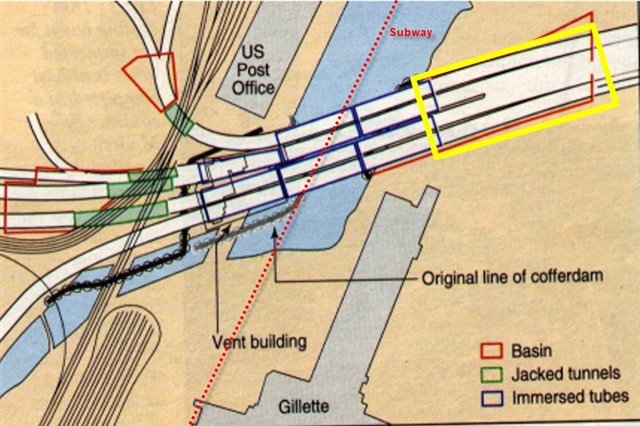 By any measure this method of fabricating and positioning the Turnpike tunnel sections in Fort Point Channel was a complete success. The subway line was unharmed and, by the early 2000s, from the west and south we had a way to get to Logan Airport and points north without having to slog through downtown Boston traffic. The original $400 million estimate for this part of the project? Fuhgeddaboudit. Between work for the redesign, freezing of the ground, tunnel jacking, casting basin, an extra ventilation building (because now the Turnpike was underground) and other costs the highway interchange and Fort Point Channel crossing ended up costing around $4 billion.

Those of us working at the Big Dig at this time had to explain all of this extra cost to an impatient public. Our task was made harder when pretty much all the work was out of sight – either underground or underwater. Naming the new tunnel to Logan airport after Ted Williams in 1995 helped put a face (and a locally revered one, at that) on the project. Needed was a visible symbol for the city, state, and region to represent the future. It had to be something bold. And it had to be above ground.

Join me for my next blog as I tell the story of an iconic structure for the ages, courtesy of the Big Dig.

* You have every reason for asking the question “why did Massachusetts build a subway tunnel down the middle of the Fort Point Channel?” In the 1910s, having experience with several elevated transit lines, Boston insisted the extension of the line from Cambridge (then stopping at Massachusetts General Hospital near the Charles River) to South Boston be a subway. Since at least the initial section would have to be underwater anyway, it turned out to be cheaper to build down the middle of the Fort Point Channel than to extend to the eastern side of the channel and dig a tunnel there.