This week, we take you inside the FIRST Robotics Team 3467- The Windham Windup. This team consists of 30 members all with the same mission: to cultivate interest, understanding and skills in the field of engineering and technology. The team encourages creative thought, perseverance in the face of obstacles, cooperation & compromise. This team has faced change in their community; they faced issues with funding, turnover of team members and mentors. Since 2003, 11 teams have been forced to retire due to changes in their community. This team developed a business strategy to maintain funding and sustain all these yearly changes. They have also been able to serve the community well, they have taken part of the 4H Science Bonanza, which is dedicated engaging kids in stem through hands on experience, they have been a vital part of the Windham’s Strawberry festival which supports the Windham Library and they have been taken part in the NH Tech Fest, an event that celebrates stem and the contributions provided.

One team member Vivi, has taken some time to answer some of our questions We first asked her what drew her in to the FIRST Robotics Competition. She explained to us that she like having the opportunity to learn new skills and information on a new subject that she had never been exposed to before. She said that she’s always been interested in science and STEM, but never really had a good outlet where she was able to get real experience in those fields until the FIRST team came along. After stopping in on a meeting, watching some competitions, and seeing what FRC was all about, she knew she wanted to try it out. What Vivi learned and the experiences she had has made joining the team one of the best decisions she has ever made. 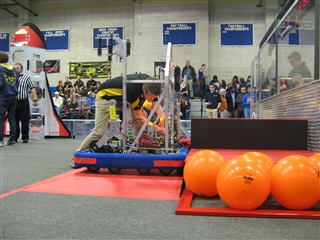 As mentioned earlier, a challenge this team faced was when former team members graduated and the affect that has on the team. When we asked Paul what the teams toughest challenge was he said that losing team members to graduation really hurt this team. “After they left, our team had the lack of technical and leadership skills necessary to properly educate new students and have a successful season. As a first-year student going through this, it was very frustrating to see all this fascinating new stuff going on, trying to learn it, but not being able to help with what was going on. Having to step up and quickly learn necessary skills to be a contributing member of the team was extremely tough, but it really helped me grow as a person and be able to help the team be successful.” 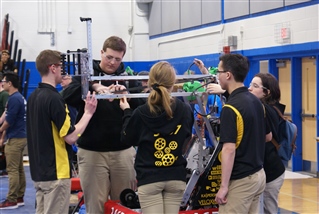 with it. Vivi mentioned that the experience that she received through this team has taught her so much and that she believes it will help her tremendously in college. Vivi said “Being on the team has taught me so much more than engineering. The vital skills that I’ve learned has helped me grow and I have already improved my high school experience in my classes, with my peers, and it has given me the confidence to try new things. It’s also given me a head start in preparing for college that is not available through any other activity.”

On April 8th, The Windham Windup participated in the 7th annual FIRST Robotics Competition designated “The Pine Tree Event” in Lewiston, Maine. This team took home the District Chairman's Award at the event. We want to congratulate them on a season well done so far as the team heads to the District Championship. We wish them continued success this season and hope that their program continues to grow. Below is the teams 2019 Chairman's Video explaining the changes they have faced, stating their mission and explaining their goals for the future. Good luck to The Windham Windup on achieving their goals in the future.