LTC6240 sensitive to temperature and out of spec input dynamic range

We have used the LTC6240HVHS5#PBF variant of the LTC6240 in a circuit that measures voltage, with circuitry that changes the gain of the opamp depending on the circumstances. However, some of the units exhibit faulty behavior, including railed output far below the spec and extreme temperature sensitivity. These units include both ones that came back "from the field" and at least one that had never been used, from the PCB assembler.

Attached is a scope shot of a malfunctioning opamp in voltage follower configuration, isolated from the rest of the circuit. Yellow is V+, Green is the signal to the non-inverting terminal, blue is the output (V- is ground). The opamp starts to rail ~700mV below the rail.

When cooling the malfunctioning opamp in the scope shot to around -30C in this configuration, the opamps rail high at a lower input voltage. When heated to 100C, the opamp nearly returns to linear operation.

Are there any known issues or defects with the LTC6240 with regards to temperature or other conditions? Could these symptoms be cause by relatively high vibration environments? 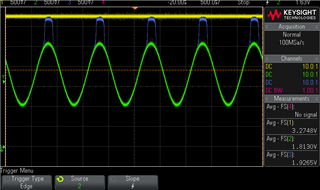