The datasheet of ADA4522 shows the measured voltage noise density for only  > 10 Hz frequency region.

I was measured the power spectral density (square of voltage noise density) in the 0.001-32 Hz range.

The result is shown at the attached figure.

The "+" pin was shorted to ground.

The PCB layout was as in the following article

(figure 13) to minimize the thermoelectric voltages. Extra "dummy" resistor at the "+" input was added and set to 0 Ohm or to Rg||Rf.

The record of 55 hours length was obtained, and the periodograms width the 2000 seconds rectangular window was averaged.

(see green line level at the figure). Is it correct result?

3) The expected corner frequency was about 0.005 Hz, where the white noise level intersects the noise floor of the measuring system.

However, the ~0.1 Hz corner frequency was obtained.

Is this corner frequency intrinsic to the ADA4522 OPAMP? If so, is the ADA4528 OPAMP has the similar behavior?

Or the corner frequency obtained still relays to the uncompensated thermoelectric voltages?

Thank you in advise, 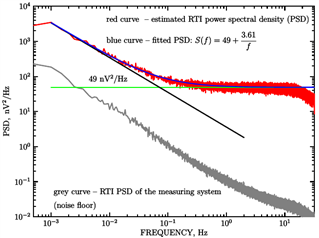 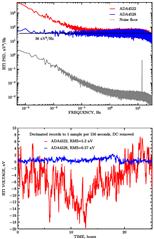