I'm working on an integrator circuit, part of which is attached. Instead of a slow drift, the output ramps to Vcc in a minute or so. Also a significant voltage (200mV) is needed to arrest the drift.

LTC2063 was used because of low offset voltage and low current <5uA. Perhaps zero drift op-amps are not suitable for this job? The LTSPICE result looks perfect though.

Does anyone know if the LTC2063 is suitable for an integrator like this? Can anyone suggest a better part, bearing in mind it must be <5uA supply current?

The rest of the circuit which resets the integrator is not shown, and not fitted yet. There's no point in building the rest until the basic integrator is working. 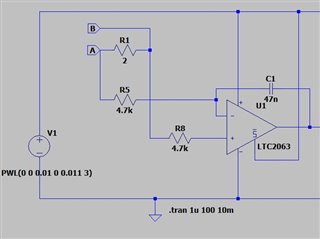