Dear all,
I would like to use LTC6373 in our measurement system with frequency range from 10Hz to around 1MHz and I would like to ask three more komplex questions (at least for me to explain them).
1: In datasheet is of LTC6373 stated that it is possible to use LTC6373 alone to drive ADC and there is Vocm level shift, diferencial output so it should be nice solution. However in datasheet is also stated that: "In some applications, it might be beneficial to use a separate amplifier/ADC driver between the LTC6373 and the precision ADC to ease the settling requirements on the LTC6373 and improve the linearity and THD performance of the signal chain". There is several examples but my question i why to use ADA4945 like in example picture and get better performance?
I belive that if performance (for example distortion) is limited by first element of signal chain so another part even with better spec is not able to hlep. CMRR is also significantly worse in LTC6373 than with ADA4945 but when common mode signals and diference signals are mixed in LTC6373 I do not think ADA4945 can improve performance after degradation. In ADA4945 datasheet there is no linarity mentioned so I have no idea if it is better or worse.
How one can conclude that chaining of those components can improve linearitty and THD and eventually pick some other combination for his needs? Or which specification of LTC6373 needs to be improved by other devices so I can decide how to improve it?
2. Another issue is related generally with differencial drivers and with output impedance of parts which feeds them. In provided picture we can see ADA4945 configured with gain of 1300/1000=1.3 but there is hidden also output impedance of LTC6373 which is 2 Ohm at 10kHz but significantly higher 30 Ohm at 1MHz. So I belive that gain is 1300/1002 (or maybe 1300/1001 as output 2 OHm value is differencial so both feedback branch of ADA4945 sees half of this value) for 10kHz signals and 1300/1030 for 1MHz.
Is this correct that output impedance of previous part changes gain of differencial amplifiers? So for flat gain response we need some buffer with flat output impedance spec?
3. I found AD8066 output curve quite flat (or small enough to not change gain too much as it is below 0.1 Ohm until 1MHz) but other spec like offset are not spectacular, also linearity is not mentioned so I do not know if using of AD8066 configured as two unity gain buffer (one for each differencial output/input) can improve or make worse this performace? Is there some other way or buffer part which can solve this issue? I belive that even if there will be some temperature fluctuations affecting output impedance that smaller output impedance - the better.
I am looking forward for your reply.

Thank you in advance 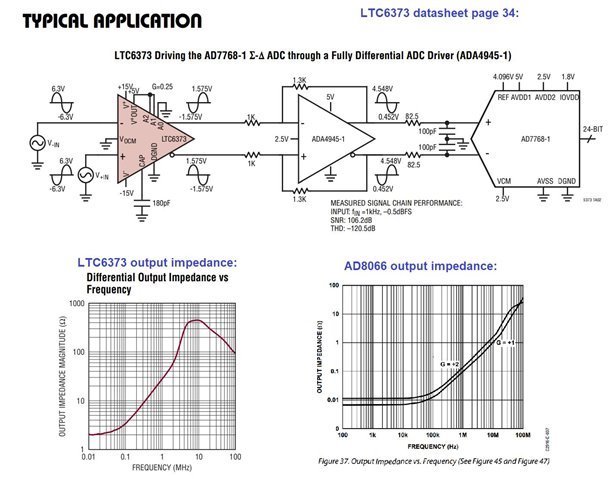