Note: I assume the source and current noise are essentially zero because of the shorted and grounded input. 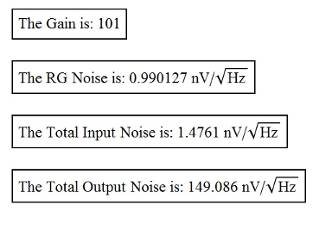 So I am expecting about 150 nV/rtHz at 1 kHz and probably pretty flat out to higher frequencies based on the curves shown in the datasheet.
I created the circuit shown in the top figure and measured the output with a 24 bit spectrum analyzer and a low noise pre amplifier set with a gain of 100 and a resolution bandwidth of 100 Hz.  I basically created a noise spectral density vs frequency plot of the output.
using the same settings, I also measured the noise of two metal foil resistors to check that my math corrections for the resolution bandwidth, gain, and the change from high impedance to 50 Ohm impedance were all correct. The two resistors measured were 20K Ohm and 2 K ohm with 18 nV/rt Hz and 5.7 nV/rtHz  .Both resistors measured pretty accurately  but the AD8429 was considerably higher than these expected values. I just dont see where the problem is? Maybe I am missing something in the theoretical calculations, my measurements are wrong, or the datasheet is incorrect.
Does anyone have any similar measurements?
thanks,
Chris
EngineerZone Uses cookies to ensure you get the best experience in our community. For more information on cookies, please read our Privacy & Security Statement.