I'm using an ADA4522-4 as a buffer and amplifier for a simple current sense circuit and I observe a strange behavior where one inputs starts to sink a lot of current when another amplifier saturates.

My circuit consists of a 330kΩ sense resistor intended to make a voltage from 0 to 3.3V when passing a current from 0 to 10 µA from V_fiber_-.
This voltage (call it I_leak_raw) is then buffered by two Opamps in the ADA4522-4 and sent to an ADC for sampling. Let's call them Channel C and D.
See schematic sections. 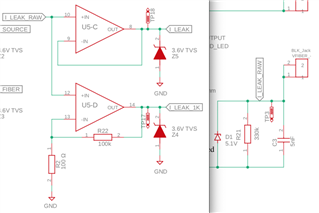 Channel C: One of the Opams is configured as a simple buffer (gain of 1) where the I_leak_raw is connected to positive input and the output is connected to the negative input, and to one ADC channel.
Channel D: The other Opamp is configured as a non-inverting amplifier with a gain of 1000X, and the output is sent to another ADC channel (and limited by a 3.6V Zener diode). The intention here is to be able to measure nA range currents with this channel.

As the I_leak_raw grows, channel D reports very high sensitivity and then saturates, and then channel C should continue to report the rest of the range. Surprisingly, it seems that when channel D saturates, the positive input into channel C starts sinking considerable current (almost acting like a short to ground) and therefore negates the impedance of the 330 kΩ sense resistor.

Channels A and B  are used as voltage buffers for other signals and don't seem to be affected, but thorough testing is pending, so perhaps they are also sinking current when Chanel D saturates.

Is this behavior expected? Or am I abusing the Opamps with this configuration?
Can someone recommend changes to the circuit (or pointers to similar) to facilitate this dual range (dual gain) setup?
I have tried adding a 1 kΩ resistor on the input to channel D but this did not seem to have any effect.