I'm  a DFAE in Japanese disty.

Our customer is using a part of AD8436 as  attached inverting amplifier.

<Q1>: Is it no problem to use it as an operation amplifier?

If  the answer to Q1 is "no problem" , please also take care Q2 below.

The attached schematic amplifies input voltage to about -10.7 times. 300mV input is amplified to -3.2V.

<Q2>: As for the schematic, is there any way to lower such Vout fluctuation caused Ta rising 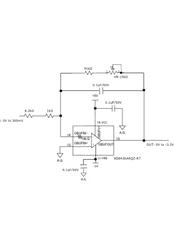