Case 3: With Increased frequency of 10KHz if Vin is reduced to 1V, Gain approx =1 with phase delay.

Gain is changing with input voltage and frequency (just 10KHz)

Please find attached simulation result. The input frequency of  my design is 1KHz to 10KHz.

Is this the desired behavior of LT1991? It seems there is problem with Spice model. 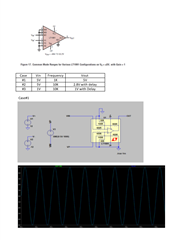