We are attempting to use an AD8630 to amplify the signals from four thermopiles.  This amplifier was recommended by Dexter Research, a thermopile manufacturer.  One thermopile is equipped with broad-band optical window which admits a lot of light, and the others have narrow-band windows.  Our stronger signals are showing oscillating behavior with a long time constant, around 2 seconds.

I set up an experiment in which I exposed our sensor to ambient conditions, then placed it in front of a blackbody radiator, and finally returned it to its original position.  This is what I consider a good result.  It comes from one of our weak, narrow-band detectors.  The gain is very high, 22000 X in a single stage, but it appears to be clean.

The horizontal time scale in all graphs is 2.0 seconds / division.  The vertical voltage scale in this graph is 50 mV / division. 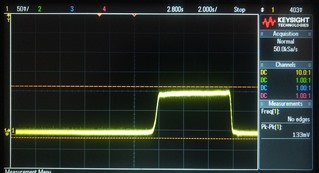 Our broadband detector admits more light.  The gain is 1200 X but the raw signal is stronger.  When I repeated the experiment above, I obtained this.  Notice the strong peaks on the leading edge of the pulse, and the long settling times on both the rising and falling edge.  Vertical scale = 200 mV / division. 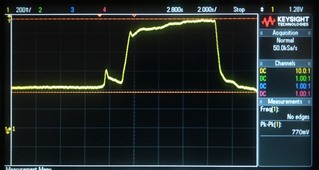 I was concerned that my movement of the sensor was not very exact, so I repeated the experiment with the sensor fixed in place.  I blocked the black body with an insulating Styrofoam sheet, and raised and lowered the sheet to record the response and the recovery.  I observed the small signal and the large simultaneously.  This setup improved the large-signal response, but there is still ringing on the rising and falling edges, and ripple on the top.  Vertical scale = mixed, 50 mV / division for the lower signal and 200 mV / division for the upper signal. 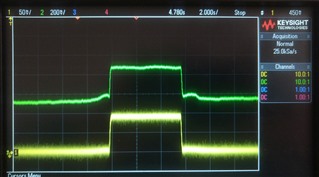 I was looking through the AD8628/29/30 data sheet and noticed that a thermopile amplification circuit is shown in Figure 62.  Surprisingly, a decoupling capacitor is shown connected to the 5V supply.  This is not something I normally expect to see in a linear circuit, but after seeing it I realized that the switching circuitry in the zero-drift circuitry may demand variable amounts of current.

My circuit does not have a decoupling capacitor.  Adding one will be a chore, but I will figure something out if it will help.  Because I am testing thermopiles, I had to manufacture a PCB with an EMI shield from the start, a breadboard was too noisy to test.  Could the absence of a decoupling capacitor be compromising my signals?  What value should I use for this capacitor?  It is not described anywhere in the data sheet.

Thanks for your assistance.