I "updated" my ADALM-Pluto to recognize the transceiver chip as an AD9364 according to the instructions in the Wiki (https://wiki.analog.com/university/tools/pluto/users/customizing#updating_to_the_ad9364).

After the upgrade, I can capture I/Q samples with a baseband sample rate of up to 56 MSa/s (not through USB, but into the Pluto's RAM).
I wanted to better understand the drawbacks of this mod, so I measured the frequency impulse response using a known, 50MHz wide OFDM signal transmitted by an Ettus USRP B210.
The USRP output was directly connected to the ADALM-Pluto input with an SMA cable and the OFDM signal was in the Pluto's baseband centered around +2MHz.
I understand that this use of the Pluto is somewhat out-of-spec, but I hope you can still help me with my questions.

This is the frequency response I got: 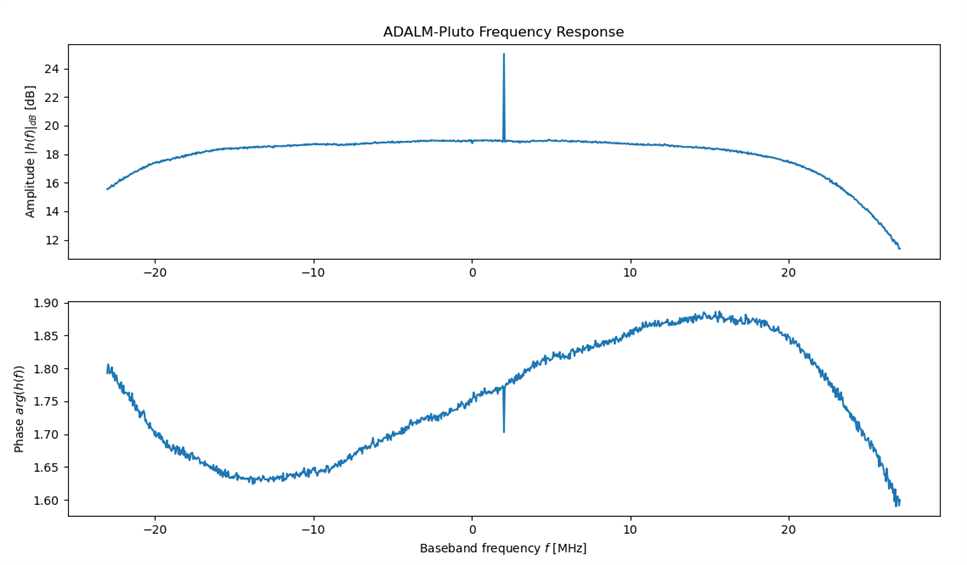 Clearly, the "spike" at +2MHz is due to the DC subcarrier at the USRP transmitter.
But what about the low-pass characteristic? I'm pretty confident it is an effect of the Pluto receiver hardware.

Is this due to the RX Baseband Low-Pass filter (which according to the AD9363 reference manual has a maximum BB bandwidth of 14MHz, i.e. 28MHz for the complex baseband)? Or is it caused by some other component of the RX chain? Is there any way to configure this to get rid of the effect?

The non-linear phase that I'm seeing, is this also caused by the low-pass filter?

Any hints are greatly appreciated!