You can file this blog entry under exploring interesting bits of electronics hidden in everyday household items much like these two previous entries on using coin cell batteries and flickering LED candles. Solar rechargeable LED garden or pathway stake lights have become very inexpensive and common place. Looking from the outside, they generally consist of a small solar panel to charge a battery and a high brightness white LED. A typical most inexpensive example, as shown in figure 1, costs as little as $1.00 but maybe up to $2.00 each. 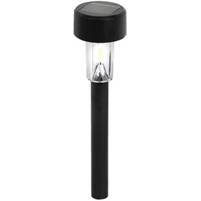 The LED comes on when it gets dark and the solar panel is no longer able to charge the battery, so there has to be some sort of control circuit inside to do this. Inside the example I deconstructed was a single 1.25 volt 100 mAh AAA NiCd cell and a small PCB with the LED, a 220 uH inductor, and a four pin voltage boosting integrated circuit marked YX8018. The complete circuit is shown in figure 2. 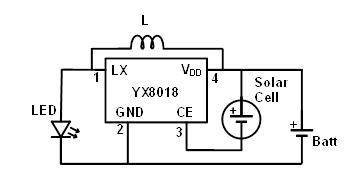 The YX8018 comes in a 4 pin transistor style TO-94 package and the pin configuration is shown here:

The YX8018 is more or less just a gated oscillator which runs at approximately 200 KHz driving an open drain NMOS switch ( output on pin1 ). The circuit pulses the small inductor to step up the voltage to drive the LED in a similar way as a Joule Thief circuit. The use of a single AAA NiCd rechargeable cell keeps the cost down. Which also means the solar panel can be a cheaper low voltage version. The 3 cm x 3 cm one from this example generated 2.7 volts in full sunlight with a short circuit current of 17 mA.

To reduce the component count the application of the YX8108 chip is rather ingenious. They use the internal ESD diode between the CE ( chip enable ) input and ground for charging the NiCd cell from the solar panel, but also use the voltage ( or lack thereof ) from the solar panel to detect when it is dark enough to turn the LED on. The CE input includes a small pull-up current. I measured about 30 uA with 1.25 volts on VDD . This small current will pull pin 3 high gating on the oscillator if the solar panel is not generating more than 30 uA of current. An alternative method of controlling the CE input shown in the datasheet is to use a light dependent resistor CdS photocell between CE and GND.

So that’s all there is to this garden light, but what else can we do with these parts to learn about electronics? Well, as in these Lab activities, we can learn about the Characteristics of Photovoltaic Solar Cells, the Diode current vs. voltage curves of the white LED, and the characteristics of the rechargeable AAA NiCd cell. In addition we can learn more about inductor based DC-DC Converters by building various configurations around the YX8018 chip. Some of the following is from the figures in the datasheet of the YX8018, others are ones I’ve come up with. Note that in most of these examples I’ve omitted the solar panel and leave the CE pin floating for continuous operation. 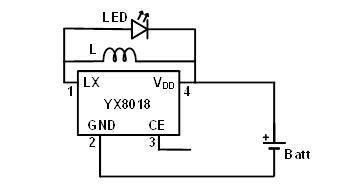 The basic configurations in figures 2 and 3 drive the LED with pulses of current at the oscillator frequency. This is fine because the frequency is way above anything the eye can perceive as flicker. We can rectify and filter these pulses into a DC voltage to drive the LED as shown in figure 4. Rectifying diode D1 can be a standard diode such as a 1N914 but a more efficient choice for these low voltages would be a Schottky diode. At these high frequencies, filter capacitor C1 does not need to be very large, a 0.1uF or 1.0uF value will work well.

By adding another diode and capacitor we can generate negative output voltages as shown in figure 5. We don’t necessarily need a negative voltage to drive the LED but this is more a demonstration of how DC-DC converters can also generate negative voltages from positive voltages. Capacitor C1 and diode D1 level shift the positive peaks of the voltage waveform at pin 1 and clamp the voltage seen at the junction of D1 and D2 to a diode above ground. This now negative going waveform is rectified by D2 and filtered by C2 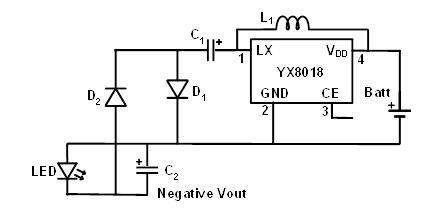 The datasheet includes a table listing the output current at a VDD of 1.25 V for different inductor values. I’ve reproduced it here.

Another option is to replace the simple inductor with a transformer. The Coilcraft Hexapath 6 winding HPH1-1400L has a winding inductance of 200 uH so it fits right in the range of values listed in the table. In figure 6 we have configured the HPH1-1400L as a 1:5 step up transformer and the circuit can deliver 1 mA of current to a 15 KΩ load resistor ( or 15 V DC )

I’m sure there are countless other possible circuits we could think up. Such as using one of the AWG outputs from the Analog Discovery module to drive the CE input. Appling a pulse width modulated square wave could serve as a way to change the brightness of the LED.

Adding a voltage comparator to drive the CE input with feedback from the boosted output adds regulation to the circuit as in the DC-DC converter Lab Activity. The regulation scheme proposed in the Lab is more complex but a simpler version can be made by adding just a couple of resistors and an NPN transistor to figure 4 which demonstrates the concept. Figure 7 shows the additional circuitry.

The regulated output voltage will be N times the VBE of Q1 (a 2N3904 works well). The multiplication factor N is set by the resistor divider ratio. Using the 10 KΩ potentiometer and the resistor values shown the output should be adjustable to a range of voltages around +5 V. The load regulation is fairly good up to the maximum current based on the chosen value for L1 however, the temperature stability will be rather poor because of the strong negative TC of VBE.