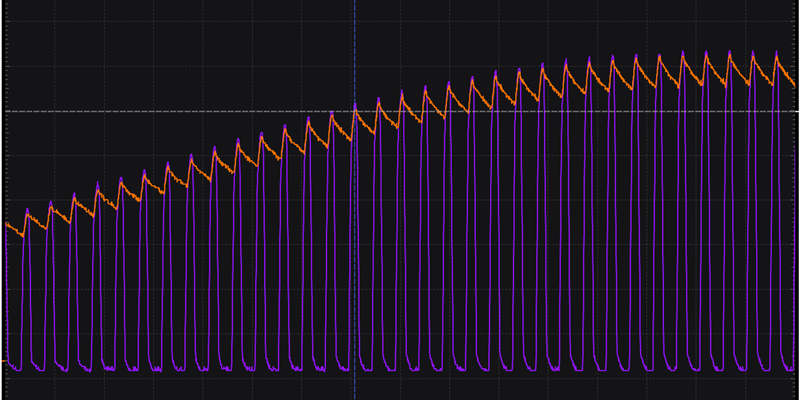 One of the primary uses of Amplitude Modulation is in aiding the transmission of information.

Let us suppose we are in a room full of students, and the students in the back of the classroom cannot hear the teacher. He can increase his volume and speak louder so the students can hear him.

Because we have increased the amplitude of the signal at the source, this signal will be transmitted further, before being attenuated below the threshold of hearing.

Amplitude modulation (AM) is known as the modification of the amplitude of a waveform by variation of a second waveform.

First, let us see how to form an amplitude modulated signal from two cosine waves:

Combining these two functions as presented below, we obtain, as it is called, an amplitude modulated signal:

Now, let us look at the following picture. 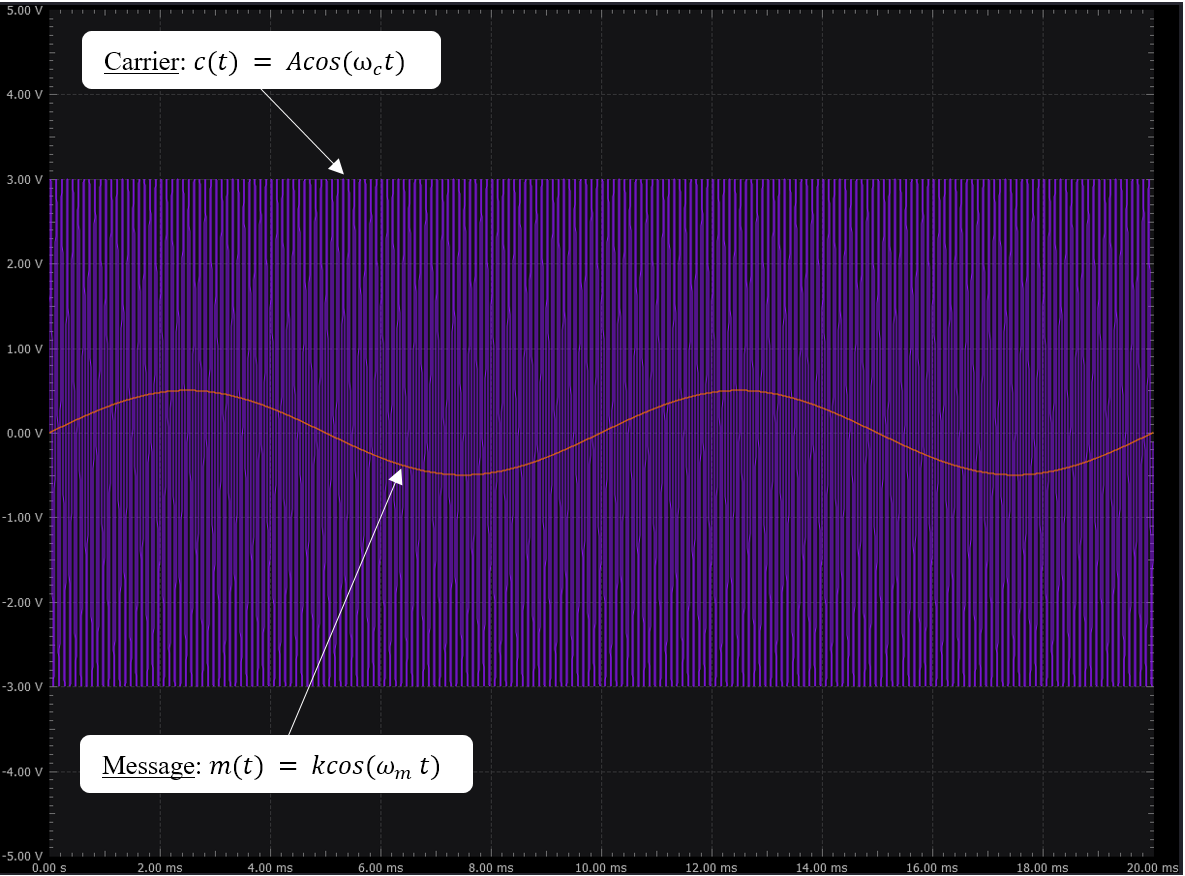 On the Voltage vs time graph there are plotted both the message waveform and the carrier waveform.

In this particular case there are chosen: 10 KHz frequency for the carrier waveform and 100Hz for the message waveform.

Typically, when forming an AM signal waveform, the carrier frequency, ωc is much greater that the modulating (message) frequency ωm. So, in this case, there is a factor of 100 difference between the message waveform and the carrier waveform.

When the two waveforms presented above are combined together, we get the AM modulated signal: 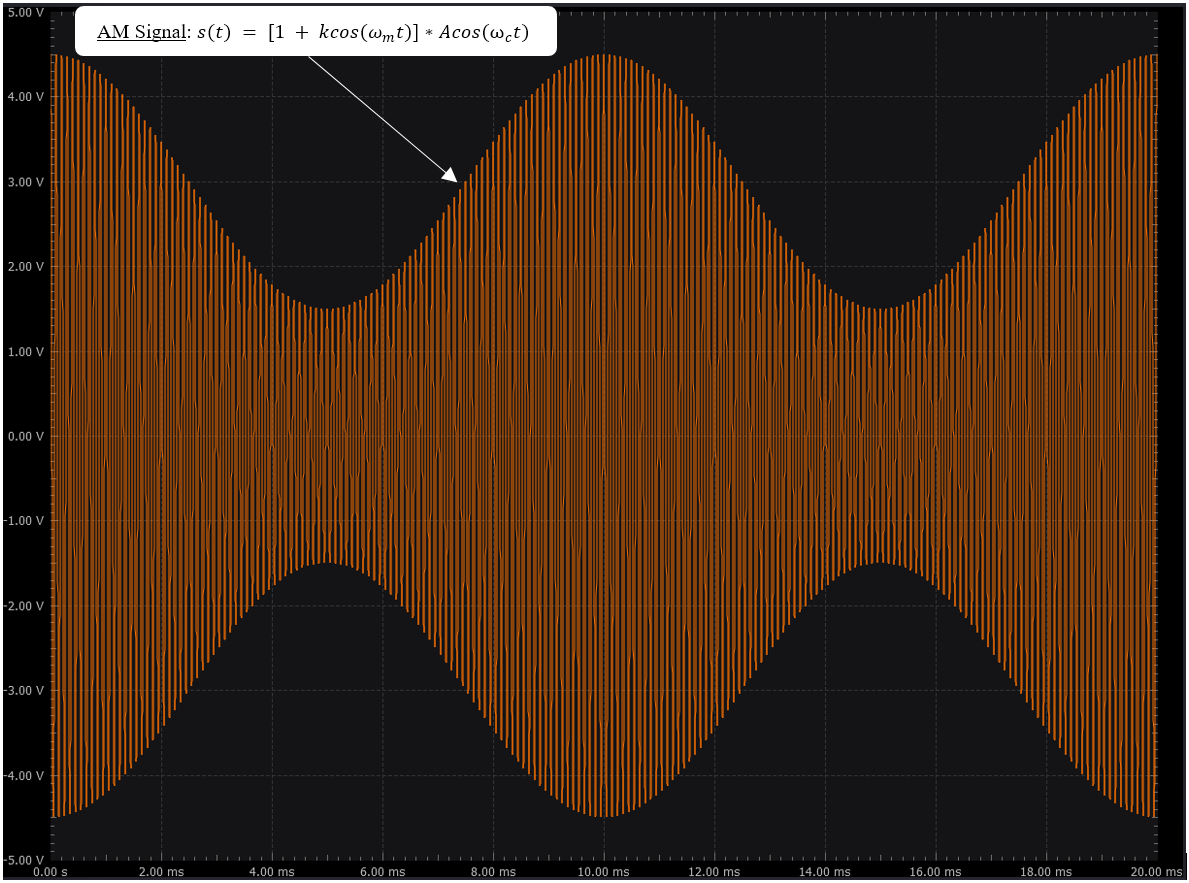 We can observe that within the obtained waveform we still have the carrier frequency varying at 10 KHz, but the amplitude of that signal is varying now at 100Hz.

Broadcasting the electromagnetic wave that carries the audio signal, we will receive the signal far away using a receiving antenna attached to an AM radio that will decode (demodulate) the carrier signal and recover the audio information.

In an AM radio signal, the high frequency carrier allows better propagation of the signal, allows smaller receiving antennas and the big difference between the modulating waveform and the carrier waveform, allows the modulated waveform to be easily demodulated.

Let’s take a look at the circuit below. 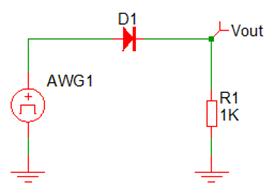 This is not actually an envelope detector, but rather a portion of it, also known as half-wave rectifier.

If we apply the previously mentioned AM modulated signal to the input of the circuit we obtain the positive half of the waveform. 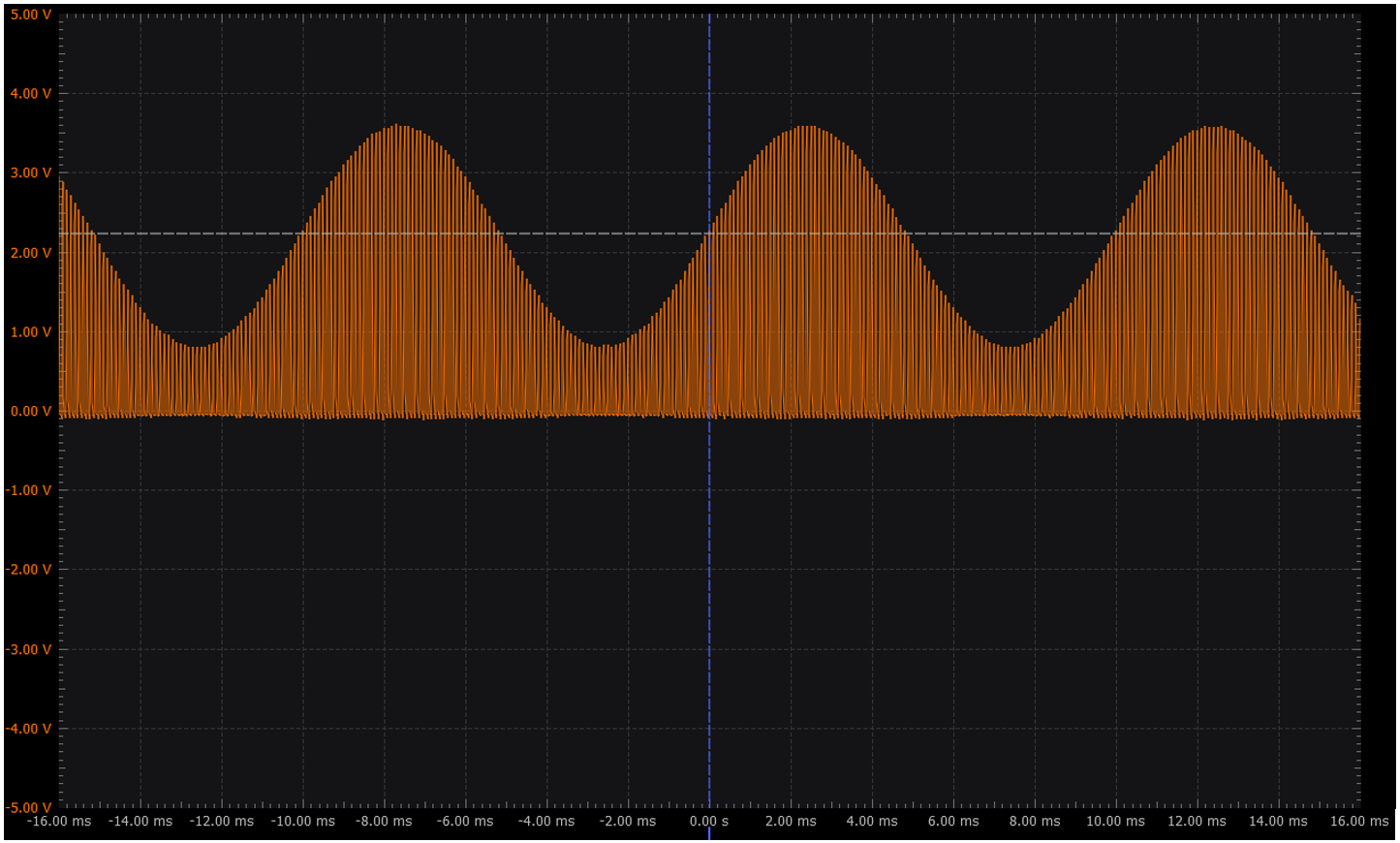 We notice that any portion that is below zero Volts is eliminated.

Now to extract the envelope from this waveform, we have to modify the circuit slightly. 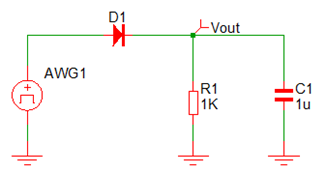 We can see that the only change has been the addition of the capacitor in parallel with the output resistor.

Now let us take look on how the circuit works. As the AM waveform goes positive, the diode will become forward biased and the output capacitor will be connected directly across the input waveform and will charge up to the input AM value. Then, as the AM voltage decreases with time, eventually the voltage across the capacitor will be larger than the input, the diode becomes reverse biased and connection between the input and the output will be cut (the portion containing the diode will become an open circuit). The voltage on the capacitor can then discharge through the resistor at a rate determined by the time constant (τ) (for more information on this subject, see the StudentZone—April 2018 ADALM1000 SMU Training Topic 4: Transient Response of RC Circuit). This process is repeating, as the waveform increases again, the voltage becomes greater than the voltage on the capacitor, the diode will turn on again and the capacitor charges up.

The result of this behavior is presented below: 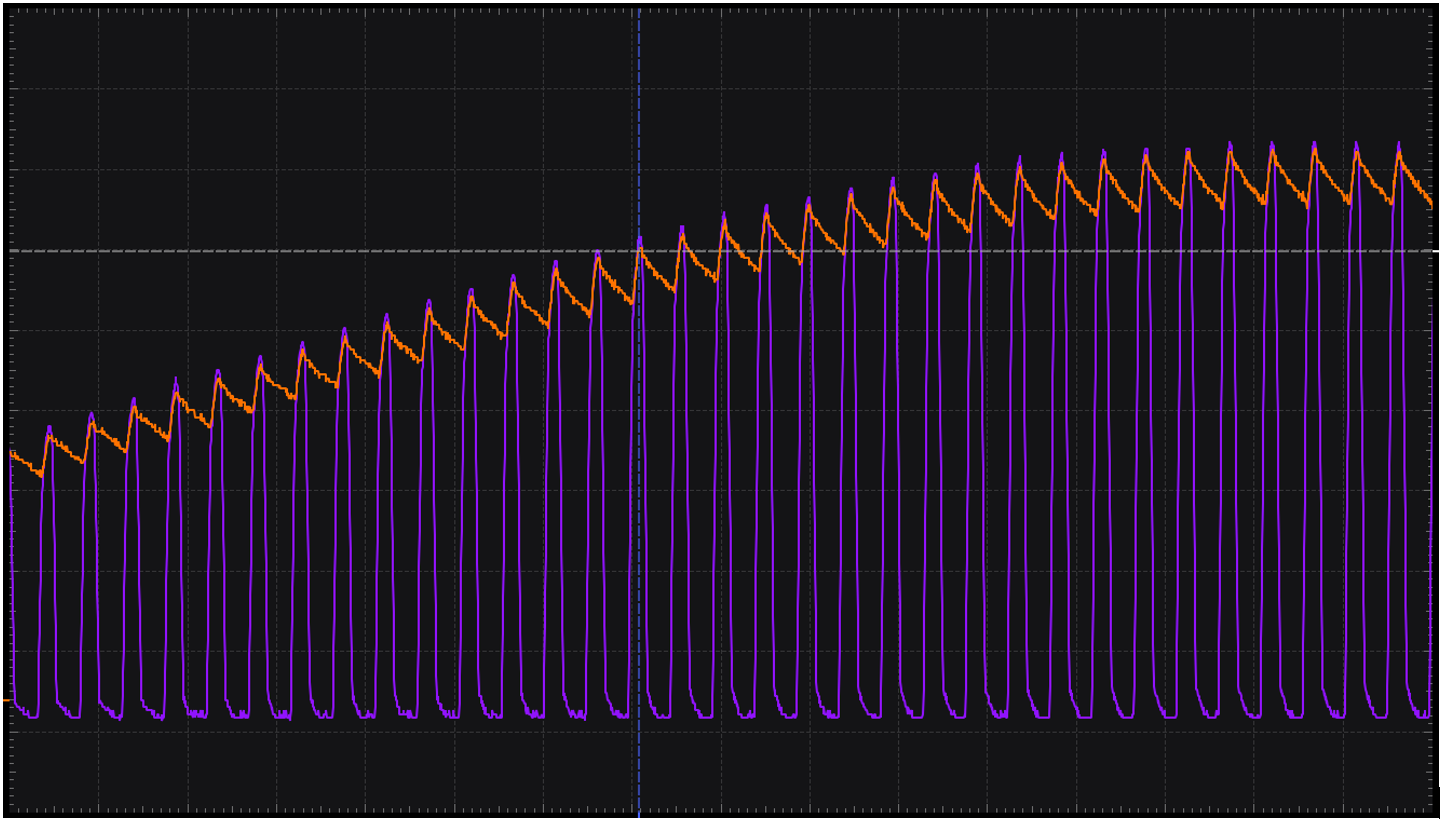 You can see what is happening. The orange waveform is tending to follow the peak amplitude (envelope) of the carrier signal.

Let us zoom out to see this more clearly. 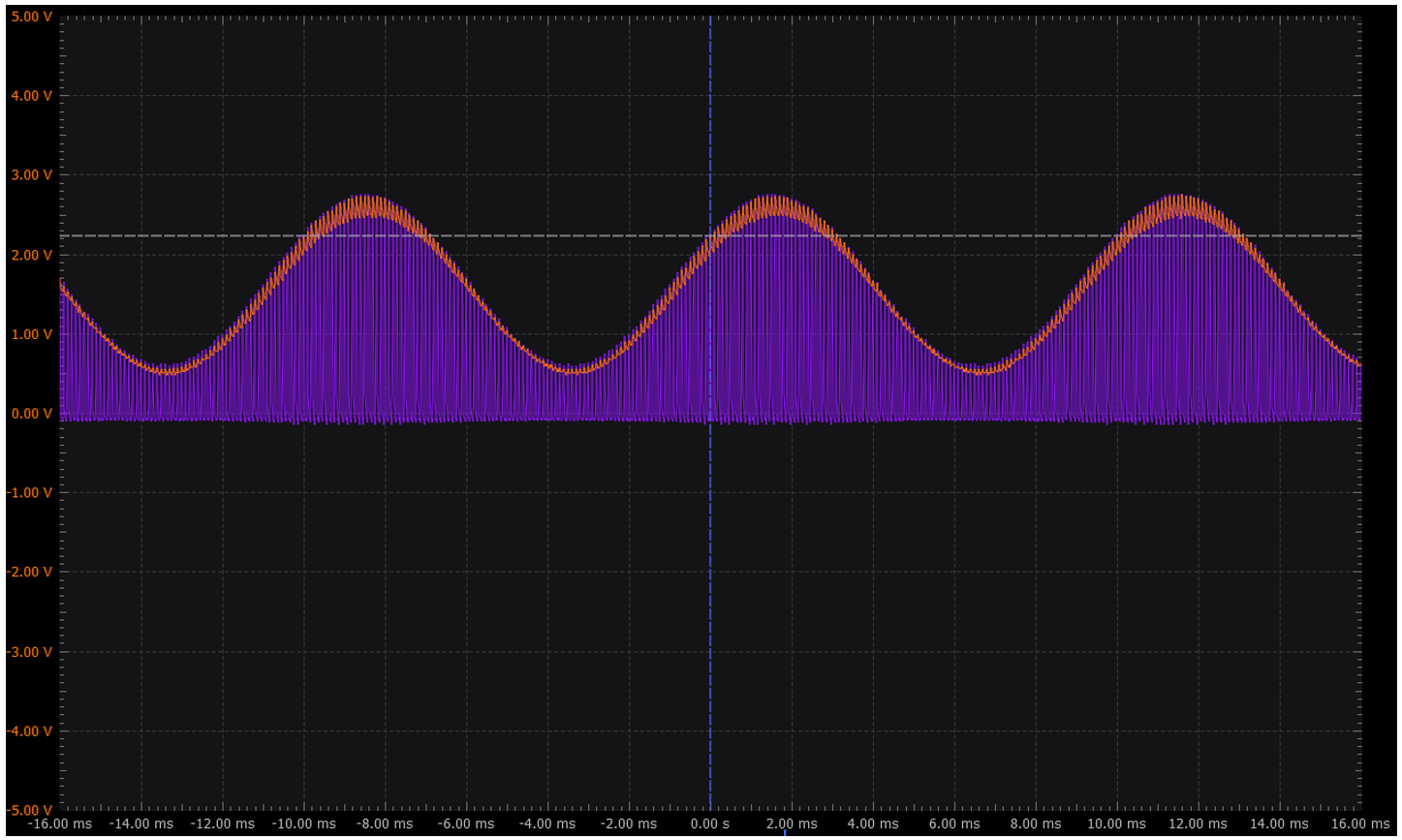 So, the output the output if the envelope detector circuit would look like this: 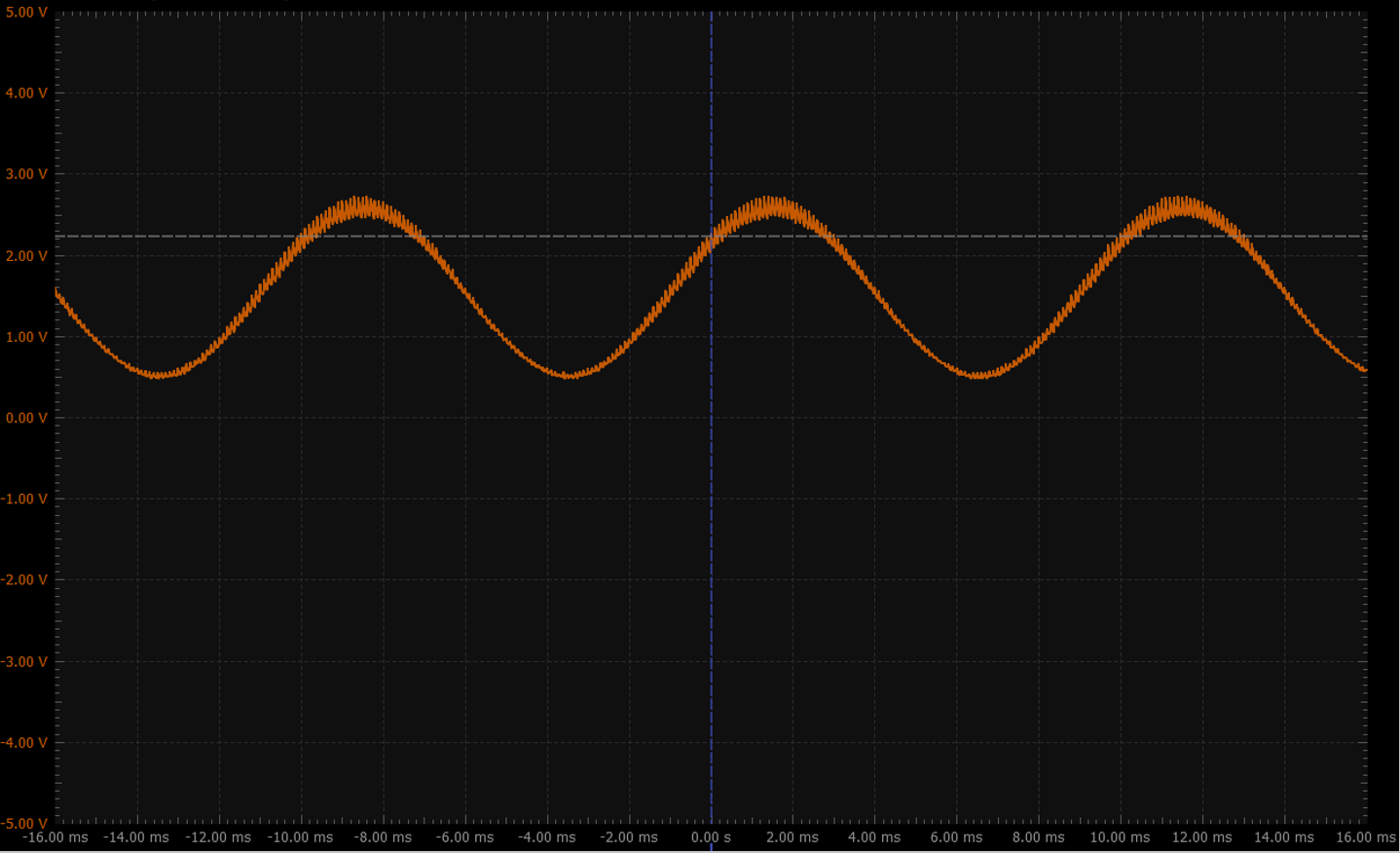 An important consideration in designing circuits like this is the time constant set by the capacitor and the resistor. If we make the time constant too fast, then instead of tracking the envelope of the signal, we will tend to track the carrier (the capacitor will charge and discharge too fast in between the variations of the carrier signal). In the other extreme, if we make the time constant too large, let’s say infinitely large (the resistor value tending to infinity), when the diode turns off the capacitor could never discharge. The capacitor will retain the maximum value of the AM waveform and the output will become a DC voltage having an AC input voltage (also called a peak detector circuit).

Note: The plots were made using the ADALM2000 - Advanced Active Learning Module and Scopy. The circuits were drawn using ADIsimPE suite.