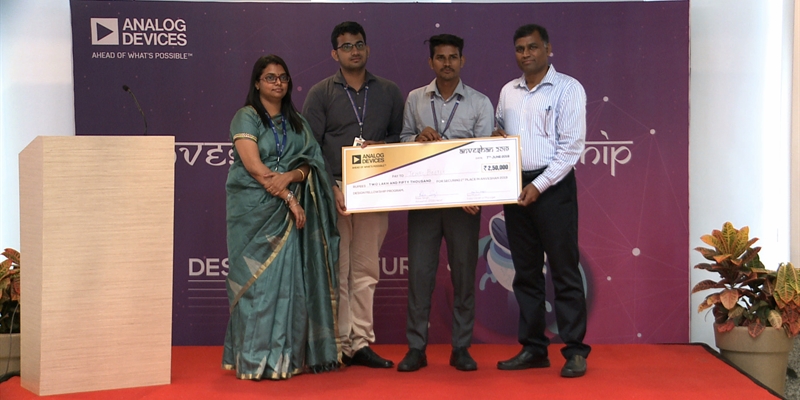 The year 2019 witnessed an increase in forest fires, tilting the ecological balance with vast tracts of Amazon rainforest, parts of California, Indonesia, Siberia and the western region of India coming under what the media calls it as “season of wild fires”. While the debate continues about identifying the root cause of these forest fires ranging from natural, human or global warming, the winning team of Anveshan 2019 has already set out to make a difference with their innovative Microbial fuel cell (MFC) based wireless forest fire early warning detection device.

Jewel Beetle, the device developed by Pratyush Mallick and Pramit Kumar, both students of Instrumentation and Electronics Engineering from the College of Engineering and Technology, Bhubaneshwar, Odisha state, was inspired during a similar forest fire at Uttarakhand region in 2016. And like its namesake insect, that is prompt in detecting forest fires, this device acts as an early warning system to aid in nipping developing forest fires.

This project was mentored by Jimmy Chalakkal, Field Application Manager of India Sales team and Ganesh Marri from CAD team. Mentorship is at the core of Anveshan, differentiating itself from other hackathons and oriented towards imparting the participating students with our culture of innovation.

Jimmy Chalakkal shared his experience with this team as insightful and rewarding with an impactful outcome. The team was placed at the bottom in the second round of selection and with Anveshan core team in a dilemma of its selection to the final round, the prospect of this team getting into the final round was bleak. “My first interaction with this team along with my co-mentor Ganesh Marri turned out to be a mixed bag of emotions. They were elated with their recent success in a hackathon with the same MVP which muted their thought process and prematurely concluded about presenting the same “stuff” for Anveshan!”, said Jimmy Chalakkal.

In the course of time, this team was first taught to define success, the concept of Design thinking keeping the ecosystem of forest at the center stage and more importantly imparting our culture of innovation. With this change in mindset, the team realized that they need to lay emphasis on designing a reliable energy harvesting module than just demonstrating the concept using Zigbee modules with PV as the only energy source. Concept of MFC based energy harvesting technique evolved after doing enough research on this topic and after multiple trial and error effort for selecting the right combination of electrodes that are reliable, locally available and cost optimized for this project. MFCs blend very well with the forest ecosystem and needs minimal or no maintenance for longer period.

This device also got selected as one of the 25 semi-finalists of the NASA’s ITech 2019 challenge and was the only one from Asia! An initiative of the NASA’s Space Technology Mission directive, this competition calls for innovative ideas that can benefit space exploration as well as solve challenges on Earth. This device also caught the attention of the Chief conservator of Forest Department, Odisha which aims to do a pilot deployment in Odisha’s forests to test the feasibility.

Meanwhile, the team Whatsapp group is still abuzz with questions on how to optimize their algorithm, hardware, and discussions on actual deployment in forest environment and other projects. Towards the end in the program review, this winning team defined a mentor as someone who allows you to see the hope inside yourself, a desired outcome for the students participating in Anveshan from ADBL!